The Winners of the 64th Festival de Cannes 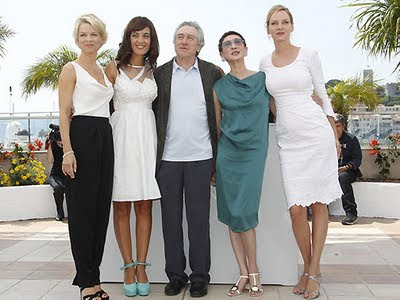 The Jury headed by Robert De Niro
The controversy filled 2011 Cannes Film Festival ended yesterday with a Palme d'Or for Terrence Malick's  much talked about "The Tree of Life."  The eleven day (May 11 -22) festival of World Cinema also saw Jodie Foster's bizarre "The Beaver" starring Mel Gibson, Michel Hazanavicius' surprising black & white silent movie "The Artist," Lynne Ramsay's dark drama "We Need to Talk About Kevin," as well as "18 Days," 10 short films about the Egyptian revolution (that just happened 3 months ago), which resulted in the resignation of President Hosni Mubarak.  But the biggest controversy involved a formal statement by the board of directors of the Festival declaring Lars von Tier persona non grata at Cannes, after the director openly declared (in a press conference) that he was a Nazi and was glad that he was not of Jewish heritage.
Here is a list of the 2011 Awardees:

Palme d'Or - "The Tree of Life" by Terence Malick

Grand Prix - "Once Upon A Time in Anatolia" by Nuri Bilge Ceylan, "The Kid with a Bike" by Jean Pierre and Luc Dardenne


--Picture courtesy of the Los Angeles Times.  Trailer from YouTube.com
Posted by Atom at 1:01 AM No comments: 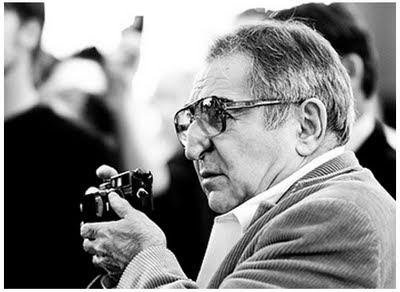 The master at work
Influences to our own photography comes from a wide variety of sources depending on our inclinations.  I count Jim Marshall as one of my main influences, not only because of my interest in 'Rock/Music Photography' as a specific specialization, but also because he was such a terrific master Portraitist.  Like the best portrait painters (and photographers), he captured the essence of his subjects superficially as well as subliminally.  His iconic portraits of 'Rock' legends graced album covers and the covers of music magazines, and are now highly prized as collectibles by music fans worldwide.
Inconspicuously present with his Leicas, shooting in 'available light,' he created a trademark look that are at once candid and vulnerable.  My favorite photos are the unguarded moments-- onstage, backstage and offstage, when Jim revealed the larger-than-life existence of these musical legends.  Intimacy was the key ingredient to his Art. 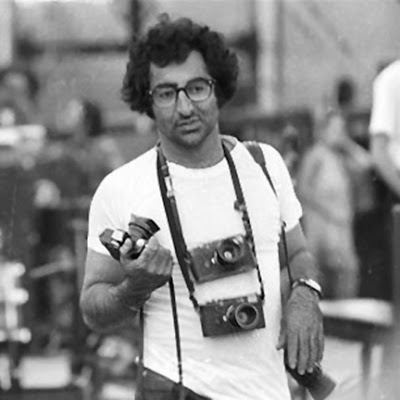 Jim with his Leicas
Jim Marshall was born in Chicago on February 3, 1936, but he grew up in San Francisco.  He had a Kodak Brownie camera when he was a kid, but only became serious with photography in Junior High.  He was working as an Insurance Claims Adjuster in 1960 when John Coltrane (Jazz icon) approached him in Berkeley by chance and asked him for some directions to a club.  Jim offered him a ride in exchange for a picture. 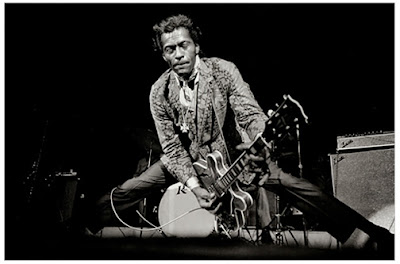 Chuck Berry rockin and rollin
Jim Marshall's photographs are some of the most wide known portraits of legendary Rock, Jazz and Blues superstars. Two of his most famous ones are the photos of Jimi Hendrix with his guitar aflame from the Monterey International Pop Festival in1967 and Janis Joplin lying on a couch backstage nursing a bottle of Southern Comfort Bourbon. 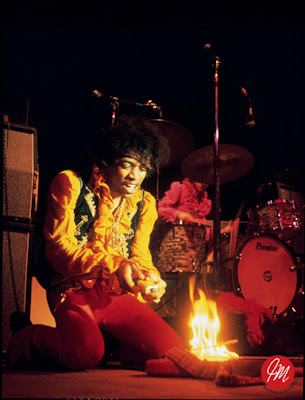 Jimi Hendrix burning his guitar on stage
Read more »
Posted by Atom at 8:11 PM No comments: