Is It The Camera Or Is It The Photographer? 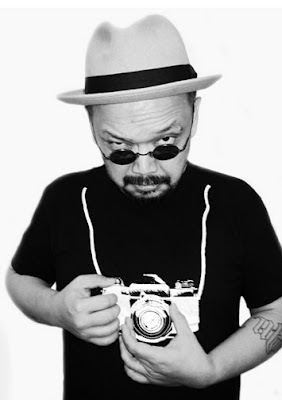 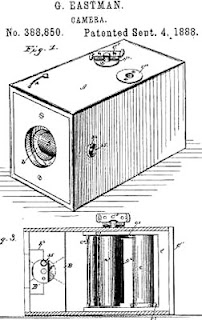 Should the photographer or the camera be credited for the quality of a photograph?  The answer to this question seems obvious (to me), yet photographers often encounter statements from people who readily tell them, "I love your pictures, you must have a great camera" or "your photos are beautiful, that expensive (professional) camera is certainly worth what you paid for."  It seems that most people have a general impression that photographers are only as good as their camera, and that a newer model, with more bells and whistles, will actually do miracles for anyone's photography-- a myth propagated and fueled by Camera manufacturers.
This erroneous belief started more than 100 years ago when George Eastman simplified the photographic process by inventing the first Kodak Camera.  "You press the button, we do the rest" promised George Eastman in 1888.  Everyone, wherever they went (since it was also portable), could easily take a picture with a Kodak -- essentially a shoebox sized light-tight box with a simple shutter, pre-loaded with his newly invented rolled-film (enough for 100 exposures).  Before Eastman, photography was a laborious occupation, exclusive to professionals who used cumbersome cameras and individually prepared glass plates.  The Kodak camera brought photography to the masses, and for the first time, knowledge and experience in the craft of photography took a back seat.
Since 1888, developments in photographic technology and imaging had made it easier and easier for all of us to take better photographs-- from point-and-shoot cameras with flash, to faster film stock and even auto-focus.  The current digital technology has even reached the point (in my opinion), where it is almost impossible to take a badly exposed photo.  Our current digital cameras (or cellphones) are not simple boxes anymore, but micro-sized pro-grade cameras that have variable shutters, irises, lenses and programmable flash guns that can all be automatically adjusted by computer.  "You press the button, and the camera literally does the rest."  In this day and age of the digital camera, everyone is at least, a competent photographer.
So has the camera finally replaced the photographer, after 120 years of technological advances?
Read more »
Posted by Atom at 7:07 AM 1 comment: 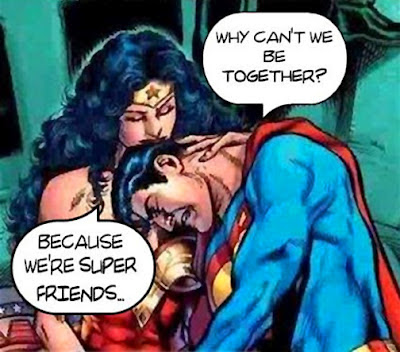 Anne's favorite Superhero is Wonder Woman... mine is Superman
If a Hero is someone distinguished by exceptional courage, nobility and strength; someone who goes beyond their limitations for the sake of another, then Anne Prado is a true Hero by any definition.  She has battled extreme adversity that most people would give up on.  But her deeds are not widely known, except to a few loved ones.  I have witnessed these acts of bravery and self-sacrifice, and I sincerely believe they should be made public. 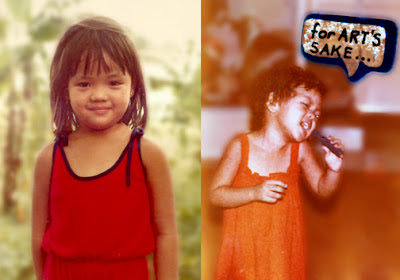 Anne was a pretty and exceptionally talented child
Anne was born Anna Marie Prado on March 2 (Her birthday is today).  She was a precocious child who loved to sing, dance and entertain people.  Entertaining patients in her mom's dental clinic as soon as she was able to walk, she was offered several times to be a professional actress but her parents refused.  Poor Anne had to contend herself with using hairbrushes and flashlights during her impromtu concerts.

Anne finally blossomed when she attended school (Assumption & Maria Montessori).  She discovered Elocution and quickly became the favorite, winning gold medals year after year.  She also had a knack for writing, which she used to pen stories and essays.  Her first real trial came at the age of seven.
Growing up in a dysfunctional extended family, Anne suffered from blatant favoritism and discrimination early on.  She was systematically excluded and picked upon by her maternal aunt and uncle from participating in their outings or from using any of her cousins' toys for as long as she can remember.  So one day, while everyone was out having a good time, Anne snuck out a cousin's bike to take a quick ride around the block.  Not knowing the bike's brake was broken, She lost control of the bike going down a hill... Anne got thrown off and the bike landed on top of her.  What followed was a hell that lasted for more than four years.
Her spine was broken.  Anne had to have a major operation to fuse her back.  She went from one Specialist to another hearing the same negative prognosis -- she will never walk again and most probably will never have children.  A brilliant Doctor (Dr. Victor Reyes) finally took on her case as a personal challenge and the operation (after suffering substantial physical pain and anguish) was a success.  But that was just the start of her battle.
Anne had to undergo extensive physical therapy just to gain some sensitivity to the lower half of her body.  Upon gaining sensation, she had to relearn how to move and use her legs, suffering endless hours of gruelling excercises administered by tough therapists.  After months in bed (crawling from one room to the next), then in traction, she finally could go back to school in a wheelchair-- where (sadly) she had to endure ridicule and incessant teasing by her schoolmates for being a cripple.  When she finally conquered the wheelchair and had to wear a full back-brace, she was rechristened "Robo Cop" by some of her classmates.  For someone proud and strong-willed, these taunts were excruciatingly painful.  But Anne endured.  Except for a big scar on her back, she was able to regain all her faculties back through sheer determination and years of hard work. 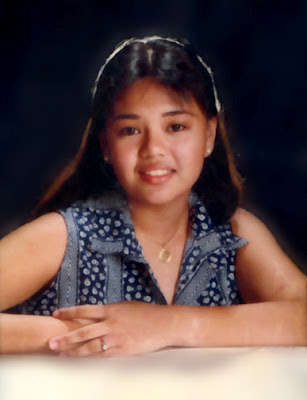 Anne around the time I met her for the first time
When I finally met her in her mom's dental clinic for the first time, she was a beautiful, smart and outspoken normal High School student from St. Scholastica.  I would not even know that she had serious spinal surgery, until we started dating a few years down the line.  We instantly liked each other and we had a lot of common interests such as Art, Philosophy, Religion, the Occult and Debate.  Opinionated and naturally arguementative, we were both members of our High School interscholastic Debating Teams (Anne ended up competing internationally and was an accredited World-Championship Adjudicator), drama clubs and (by coincidence) both award-winning Elocutionists.  But I was living in Los Angeles during that time, so we only saw each other sporadically.  But we continued our friendship whenever I visited Manila.
After a string of unsuccessful relationships, many years down the line, I called her to have lunch.  I just broke up with my last girlfriend and I needed a friend.  We have not seen each other for three years at that point, so I was stunned when I saw her again.  She had blossomed into a beautiful and vivacious young woman.  I just couldn't stop looking at her.  So ended up asking her out for a couple of more dates before going back to LA.  To cut my story short, I went back to Manila the next year and after a few more months of dating, I asked for her hand in Marriage.  I had no plans of getting hitched, but the question just popped out one evening while we were arguing on the phone.  It just felt natural and inevitable-- I wanted to be with her forever.  She told me that she felt the same way too.  Little did we expect, that our love for each other would result in a lot of anguish and turmoil for everyone involved.
Read more »
Posted by Atom at 4:44 AM No comments: