DAGSIN is opening NATIONWIDE today, APRIL 20 (Sat.) in the Philippines. 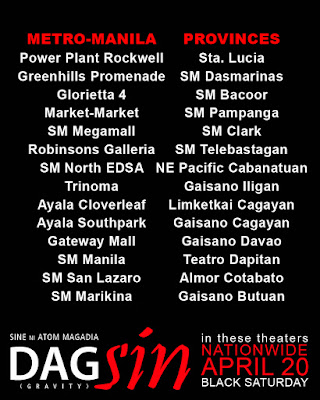 Here is a behind the scenes interview of DAGSIN's main cast, talking about their roles in the movie.
--The video is the exclusive property of Atom & Anne Mediaworks. Any reproduction must have the explicit permission of the owner.﻿
Posted by Atom at 7:24 PM No comments:

DAGSIN'S 2019 Theatrical Trailer is Out

DAGSIN's new 2019 Theatrical Trailer can be seen in theaters nationwide by next week!

Please support our humble little film as it finally makes its debut in theaters nationwide. Anne and I, as Co-Writers and the Producer, and Director respectively, treat this movie like it was our child. After years of conceptualizing/planning, giving birth (shooting and editing), then bringing it to school and winning awards (going to Film Festivals), DAGSIN is now finally ready to graduate by being shown in regular theaters!
Please help us to keep DAGSIN in theaters long enough for people to be able to watch it, by telling your friends and family all about it! PLEASE SHARE THIS POST  for support. Small Filipino Indie Films like DAGSIN will not succeed without your help and support!
--You can view or download this Trailer directly from YouTube.
Posted by Atom at 5:55 PM No comments:

Dagsin will finally be shown in theaters NATIONWIDE starting APRIL 20, Black Saturday!!!! Many of you asked for it, so we have done are best to make it happen. Our UNIQUE HOLY WEEK inspired LOVE STORY will be available all over the PHILIPPINES at last!
Please support quality Pinoy Indie movies. PASS THIS NEWS to all your friends and family, and PERSUADE THEM TO WATCH to keep Dagsin in theaters-- still the best way to see movies that were intended to be shown on a theater screen! This might be your last chance to see our internationally multi-awarded movie on the big screen locally, so don't miss this chance!

We will announce the list of theaters as soon as it becomes available... 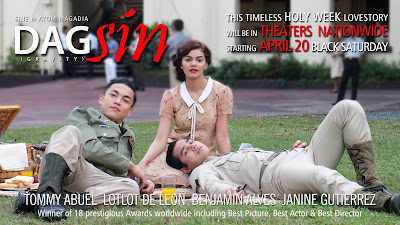 At long last, "Harana Ni Justino," Dagsin's main theme song is now available online for viewing and download in YouTube @ https://www.youtube.com/watch?v=W2UN0a5hWmQ. I wrote the lyrics of the song, based on a letter I wrote for Anne years ago, and my friend Bob (Robert) Yulo  wrote the music exclusively for the movie.

It premiered on February 14, 2019, Valentine's Eve, in the Philippines!


﻿
--This video is the exclusive property of Atom & Anne Mediaworks. Any duplication and distribution must have the expressed consent of the copyright owner.
Posted by Atom at 2:14 PM No comments:


"Dagsin" ("Gravity" in English) took twenty years to evolve into a movie. I originally came up with the prototype of the story when I was still a film student at the Art Center College of Design in Los Angles in the mid-1990s. The original short-film screenplay was then titled, "This Mortal Coil," and it was submitted as an exercise/assignment for my Screenplay Writing Class. It was just eight pages long, and it only contained what eventually ended up as the "climactic scene" in the finished movie.
﻿
The original short script told the story of an old paraplegic resident of an American Retirement Home-- a wheelchair bound man (originally Caucasian) who recently lost his wife of fifty years. Wandering into their apartment after her Interment, he feels the weight of his sorrow so strongly that he decides to hang himself from the ceiling rafters of their bedroom.

I was going through a rough phase in my love life at that time that the Romantic in me chose to write about an ideal relationship, where someone was so in love that he would be completely devastated at the lost of his beloved-- a storybook type of Love Story. Besides, the idea of a wheelchair bound paraplegic man hanging himself with his feet still touching the ground yet powerless to escape his chosen fate (self-pity can soar with imagination), was such a strong poetic image, indelibly cinematic and memorable that it would guarantee me a good grade for the class!
Years later, the original seed concept for "Dagsin" resurfaces. After writing half a dozen full-length feature spec. scripts, I was looking for a short-film project to jump start my filmmaking career and "This Mortal Coil" was the prime candidate. So I began rewriting the original script, since I thought that the suicide sequence was not strong enough to stand by itself. But as I added simple flashback sequences, it started to get longer and longer. Soon, it was twenty pages long and that was just the backgrounder to the love story, I haven't even begun to say, what I really wanted to say.

By definition, a short-film is just about eight minutes long (or an 8-page script). Anything longer than that, and your chances of entering it in a major international competition gets slimmer and slimmer. Cannes for example only accepts 15 mins. maximum for their Short Film entries. Knowing that my story has potential beyond being just a short movie, and understanding that short films do not have a commercial market, I then committed to writing the story I really want to tell no matter how long the screenplay ended up becoming. During that time, I was already married for more than ten years (found a partner I want to spend my life with), had kids and recently suffered a Stroke. I wanted the story to reflect everything I have learned and have gone through in my life up to that point. Thankfully the first draft I wrote totaled just one hundred twenty pages in Movie Magic (Hollywood standard Screenplay Software) - which counts each page to be roughly equivalent to a minute of screen time.
﻿
The first thing I incorporated to my original story was the flashback sequences. I knew by instinct that I had to make my viewers fall in love with my main characters first, for them to empathize with the loss they will be experiencing as the story unfolds. Making the audience spectators of the romance between Justino and Corazon from the beginning and making them experience the love that develops between the couple through the years, was my main goal. It was a deliberate decision on my part to make the film essentially a "Love Story" in terms of classification and genre, since the main theme of the movie even then was "only Love can save us from the pain and tragedies of life."

The historical breath and timeline of the story came naturally when I plotted Justino's life in reverse. By his present age, he would have been born in the 1920's and would have gone through World War II and the Martial Law era in the 1970's. The decision to place him at the front row of these major events as they unfolded was elementary. Since he was an action oriented man (idealistic, heroic and strong-willed) who would eventually be crippled by the very nature of human existence, making him an active participant in the critical periods of our country's history would effectively magnify the tragedy and irony of his fate. It was at this point of writing when I realized that Justino was a classic "Sisyphean" character.

The Camusian and the Keirkegaardian motifs were accidental at the beginning-- suicide was already a major element in my original short story; an existential thread will always be present in any form of tragic tale; and the euthanasia theme was already incorporated in the plot, even before I started reexamining the story for any philosophical framework. But once I saw the parallelisms I consciously aligned my story to reflect the popular theses of both Existential Philosophers, believing that they will give my ideas readily comprehensible thematic universality and easily accessible depth.

The first thing I did was to change the title. "Love's Bitter Fruit" was the working title when I began writing the full-length screenplay. As a matter of fact, it was still the title when we shot the video above before the script was completed. As soon as I started incorporating the philosophical and existential threads of Kierkegaard and Camus, I decided to retitle the movie "Gravity." But when I proposed this change to Anne, she immediately objected, since Sandra Bullock's recent Oscar award-winning movie had the same exact title. I thought long and hard for an alternative, until it dawned on me that since we are making a Filipino movie it should have a Filipino title. I looked for the Pilipino/Tagalog term for Gravity and I ended up with "Dagsin."

After the title change, I started renaming my characters: Justino (the Judge or the judgmental part of our character/our mind), Corazon (the emotional part of our character/our heart), Mercy, Grace, Severino, etc. to enhance their symbolic significance and to add literary, psychological and philosophical resonance. Knowing that there are two types of Existential adherents, one Theist and the other Atheist, I made my two main characters one or the other-- essentially making the two theological leanings engage in a dialogue throughout the story (backed up by the dialectic ideas of Kierkegaard and Camus respectively). In spite of this, the last thing I wanted was an intellectual movie so I decided not pepper the script with philosophical and academic exposition, but the opposing themes are readily present in the individual perspectives and motivations of my main characters.
To drive these themes forward, I created sub-plots for the supporting characters of Mercy and Grace, who also turn out to be victims of Martial Law or of fate in general. I never intended the movie to have a strong political stand, other than its advocacy for personal freedom in all its forms as a means to "Self-Actualization." I tried my best to be objective politically, utilizing commonly known facts like the wartime atrocities of the Japanese and the human-right abuses during Martial Law that have been widely documented. This is very deliberate, because I never want any type of partisan politics or popular sentiment to cloud my main philosophical perspective-- that human beings are directly responsible for creating the major problems we have been suffering from and would continue to suffer from, until we all realize that the only lasting solution to the tragedies we have been continually experiencing over and over since the dawn of civilization lies in our turning away (or evolution) from our still dominant beastly tendencies of violence, selfishness and greed.

I believe I ended the story satisfactorily, since a lot of people who have seen the movie usually comes up with their own personal conclusions regarding the ending-- the Religious (Catholics and Christians) commonly see a Kierkegaardian subjective compromise and the Atheists an acceptable solution to Camus' thesis to the Absurd. I wanted to answer the questions I posted in the beginning of the story in my own way. An abstracted ending was the only way I could satisfactorily address the paradox. The key to understanding both alternative realities lies in the way I eventually Directed Dagsin-- the whole movie is shot and told from the subjective perspective of Justino, so everything you experience is what he sees in his own mind!
Read more »
Posted by Atom at 4:04 PM No comments: