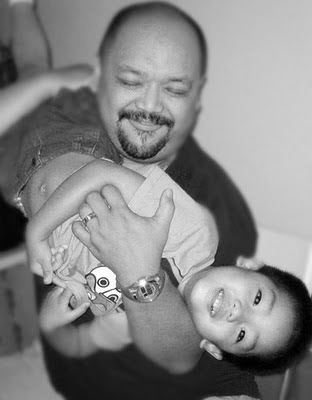 (photo by Anne Prado-Magadia)
HAPPY BIRTHDAY BUDDY!
My son, Ari (Renato III), turned 7 today.  We had a big party for him last Saturday in my parent's home.  Most of his classmates and friends attended, and everybody had great fun (one fell into the pool, another ran naked in the garden and a couple of them wrestled in the mud).
I am proud of my son, who is not only bright and artistic, but is also very popular.  He is funny and full of life.  He is also beginning to show some interest in photography, using his Nintendo DS to shoot and edit, and I am excited about it. 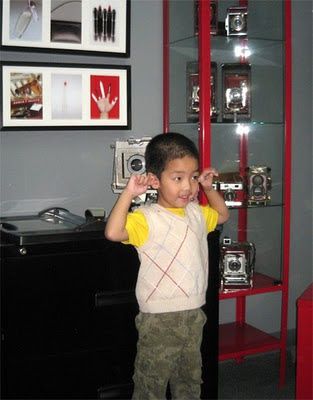 My son clowning around in my studio
I wanted to get him a real camera for his birthday, but decided to delay it for another year or two (to see if he really wants it).  I gave my daughter her own camera when she turned 6, but she hardly uses it.  Unfortunately it was in Pink, so my son would not touch it with a ten foot pole.  I do not want to force photography on him, anymore than I want to determine what he wants to be or to eventually do with his life.  But I am struggling hard to restrain my fatherly instincts to make him like what I like.  I guess it is just natural for any father...
Instead of a card this year, I am also giving my son a 'birthday comicbook,' like what I gave my daughter a month ago ("10 Years Ago Today").  As a storyteller, I find it more natural and fun to say what I am feeling by telling a story (plus I really love this iPhone App. - I highly recommend it).
Read more »
Posted by Atom at 2:30 AM No comments: 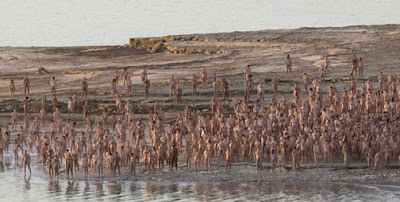 A thousand plus naked volunteers flock to the Dead Sea
Last Saturday, September 17, one thousand two hundred people (men and women aged 20 to 60 years old) flocked to the Dead Sea in Israel to get their photos taken in the 'buff.'
Most Photographers are happy to have a camera and a nude model, but 44 year old Spencer Tunick likes his pictures populated by hundreds, if not thousands of naked and willing volunteers.  Referred to as "installations" by the artist, these epic nude photographs often feature an immense number of participants shot on scenic locations. 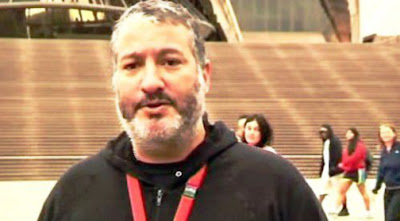 Photographer/Artist Spencer Tunick
A New York native, Spencer Tunick began photographing nudes in public locations in 1992.  Since then, he has taken his 'installations' all over the world.  According to him, "The body is always beautiful... It is a living entity...  It represents life, freedom, sensuality and it is a mechanism to carry our thoughts..."  His work has been documented in three HBO specials, "Naked States," "Naked World" and "Positively Naked." 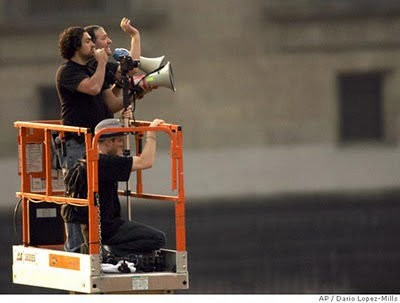 Spencer directing his cast of thousands.
The Dead Sea shoot was Spencer's first 'installation' in the Middle-East and probably the only one ever.  The organizers timed the shoot to coincide with the voting of the Seven Natural Wonders of Nature contest, hoping to draw extra attention to the Dead Sea's declining water level.  According to them, the pictures will also give the world a different perspective of Israel, instead the images of war, tanks and terrorism regularly seen on the news.
Tunick directed his models with a megaphone.  There were four predetermined sets:  Models standing on the sea bed, models floating on the buoyant salt water, models waving to the camera and models standing on the shoreline to show how much the water has receeded in recent years.  The shoot took place from 6am to 8am, since the permit was only granted for that length of time.
Orthodox Jews objected to the project from the beginning on moral grounds, especially since the chosen location is very close the known site of the ancient city of Sodom and Gomorrah.  So the organizers timed the shoot early Saturday morning, since most orthodox Jews will not take motorized transport from Friday night to Saturday Night.  Most of the models were ecstatic to be given a chance to be a part of history and Art -- the only compensation for their effort is a limited edition photograph of the experience.
Here are some examples of Spencer Tunick's "installations" in different cities throughout the years.  Please be aware that there are some graphically explicit images here.  Anyone under 18 should not click through.
Read more »
Posted by Atom at 3:33 AM No comments: