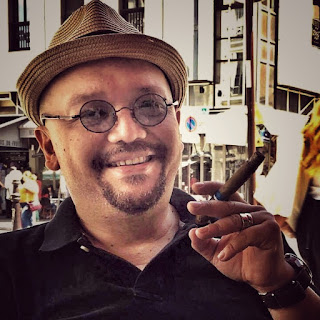 Smoking a stogie in a Café in Paris.


I've been a cigar smoker for 30 years! That's right, this year marks my 30th anniversary for smoking "Stogies." Including of course, the 7 year cold-turkey gap after my Stroke (which I blame my doctor for... LOL), I have been technically a Cigar lover for three decades.
A lot of people might be appalled by my pride at being a smoker, but I am unapologetic. Like everything else in life (be it liquor, sex or even food), smoking must be tempered and never abused. Enjoyed in moderation, it can be a great way to relax and enjoy life! In Native American culture for example, tobacco is officially smoked to pray to God (the Great Creator) or when people need to be at peace with each other (hence the Peace Pipe or the Chanumpa)-- the point being, that one person's medicine can be misused and become another person's drug. We just have to treat tobacco and our bodies with respect, by never abusing either. 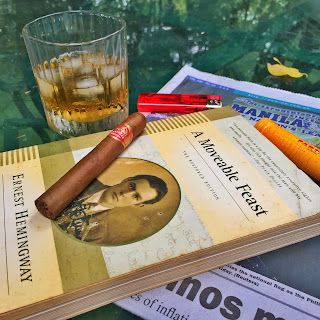 The best place to enjoy a cigar is outside in a garden with a book!
As an Asian (Chinese/Malay stock) with Spanish ancestry from both sides of my family, I take pride in my eclectic mix of cultures. Tobacco use has been a part of my cultural heritage from all three races. My Asian Ancestors smoked long before tobacco was even introduced, and no self-respecting Spanish Don (of which, both my maternal Great Grandfathers were) would be caught without a smoldering Cigar or Cigarillo stuck in their mouth! 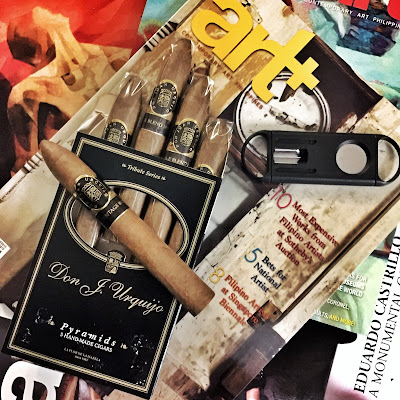 Premium hand-made cigars from the Philippines.
The Spaniards brought tobacco to the Philippines from Cuba in 1592, and they used our islands for centuries as a major supplier of quality tobacco products-- one of the colonial government's main source of revenue. It made the Philippines a financially profitable colony from the very beginning and its populace de facto smokers. In fact, Tabacalera, the direct corporate descendant of the original Spanish Tobacco Monopoly in our country, was once regarded as the largest and most sophisticated Tobacco Manufacturing Facility in the World; and its Cigars were favorably regarded as equal in quality to its Havana cousins.

It was in the summer of 1988 when I started smoking Cigars. I turned 21 the year before, which of course meant that it was then already legal for me to smoke anywhere in the world. But I have been smoking cigarettes socially ever since I was in High School, so the real catalyst for my ongoing Cigar infatuation was the Trip I took to Europe with a bunch of fellow Trojans from the University of Southern California's Business School.
Numbering almost 30 with our Professor's family and his Teaching Assistant, our motley group was tasked to do scholarly Thesis Papers on European Multi-National Corporations. We visited major Corporations in 7 countries-- among them were Royal Dutch Shell, the London Stock Exchange, BMW, Heineken, Nestle and a dozen others.

Being with a group of people my age of course included partying all night, binge drinking and lot of other things best not mentioned. I can never forget the craziness of it all-- almost being thrown out of several hotels, narrowly escaping brawls in the local pubs, then barely keeping our eyes open for our early morning meetings with corporate brass after coming home almost at dawn from these escapades. My best memories were when we got to party with Prince Albert of Monaco all night, then ended up (my roommate and myself) hanging on to the roll-bar of an open-topped Jeep, speeding around the empty streets of Monaco at dawn with a bunch of French Girls we could barely converse with nor whose names we could not remember; and the time I drove a rental car from Paris with two buddies to watch a Pink Floyd Concert in Versailles, then ended up partying and drinking with a bunch of Scottish fans who drove all the way from Scotland. It was an eye-opening trip for me and one of the wildest experiences of my life! 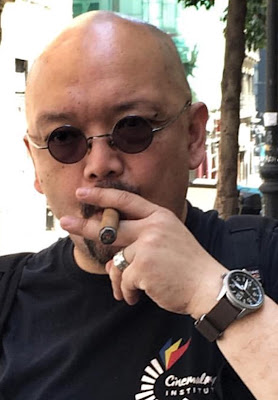 Enjoying a smoke in streets of Madrid, Spain.

The bug stuck up my ass ever since I was born was finally gone, and for the first time in my life I learned how to be carefree and spontaneous! I had so much fun on that trip that I forgot to buy something to take home as a souvenir. At the airport in Paris on my way back to the US, I scrambled in the Duty Free looking for something to commemorate my life-changing adventure. As I contemplated the wider horizon of possibilities that just opened before me, I thought it appropriate to buy something different and totally off the wall. Since I am already well-acquainted with liquor and cigarettes, I decided to purchased the next best thing, my first pack of cigars. Technically Davidoff Cigarillos (small cigars) are not full-fledged cigars by definition, but since I was not accustomed to smoking anything filterless, I thought it best not to jump the gun.
It was a smart decision. Unfamiliar with the potency of pure high-grade tobacco, I smoked my first stick inside the bathroom. Within a couple of minutes, I was lying on the floor knocked out from its fumes, barely conscious. When I finally found the strength to stand up, I looked at myself in the mirror and saw that I had a slightly green pallor. Not having a window or any form of exhaust in the bathroom, made me sick. I learned my first lesson in Cigar smoking-- don't inhale deeply and make sure that there is enough air. Good thing that Cigarillo was small and thin!
﻿﻿﻿﻿
It has been a long journey since that first smoke, thirty odd years ago! I never considered myself a Cigar Connoisseur more an Aficionado, since I enjoy smoking both exquisite Havanas as well as cheaper brands. By character, I hate limitations or being "boxed" in any way shape or form, and I abhor finicky people. Instead, I savor variety and choice in everything I do. Depending on my mood and on how much I am willing to spend (or what is readily available), you will see me enjoying a Cohiba one day and a 99 cent 7-11 Cigar the next. 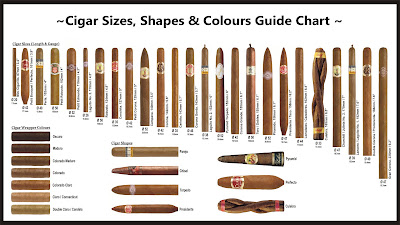