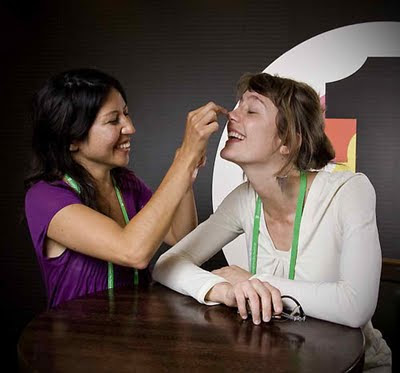 Esy with "Thing With No Name" director and Co-Producer Sarah Friedland
Esy Casey is a 30 year-old Filipino-American filmmaker who has been making waves in the Indie film circle in the last 4 years.  A visual artist who also does graphics, illustration and photography, Esy loves telling stories and is genuinely interested in the lives and cultures of people from all over the world.

The daughter of a Filipina from Zambales and an Irish-American from Detroit (they met at the University of Chicago), she says that the "Jeepney" is the perfect metaphor for her (half Filipino, half American).  She was born in LA, but has lived in different cities growing up because of her parents' research work.

Esy is currently raising funds for her new film project, "Jeepney" - a feature-length documentary that chronicles the development of the Jeepney from a military relic to a "hotrod" mass transit vehicle.  The film will also contain vignettes of conversations and stories from drivers, passengers and policy makers to chart the iconic vehicle's uncertain future.

I interviewed Esy to give you a broader picture of the artist/filmmaker behind the "Jeepney" movie.

What made you become a filmmaker?
I fell into it in my mid-twenties, when my filmmaking partner Sarah asked me to shoot her film in South Africa (THING WITH NO NAME, 2008).
Did you make films when you were younger?
I've drawn since I can remember, and have been a photographer since my teens, but I'd never held a video camera before that first film.
I understand that you are also a graphic/visual artist. How has this influence your filmmaking?
Both share the same principles of composition, color theory, gesture and expression; it's all about subtle faces, emotions, visual cues that speak a thousand words, and catching them before they slip away. 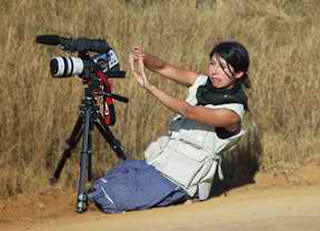 Esy at work
Please discuss your photographic background.
My dad let me use his nice, heavy Nikon FE camera from the 70s since I was a teenager, and I loved understanding the mechanics of it, the winding and clicking and developing. It was a very material pleasure, something I wasn't sure would fulfill me with the moving picture. But I've always been attracted most to a sense of motion and rhythm in still photos and print design, and that was how I fell in love with cinematography. It tells a story, and can share a lifetime of someone else's experience in a matter of minutes, which is very exciting and can change your outlook on a certain area of the world, and in your own world.

What equipment do you use to shoot your films?

I use a Canon 7D, and sometimes a LitePanels Micro, but usually available light.

I read somewhere that you won an award?

I was nominated for the Wexler cinematography award for THING WITH NO NAME, and won a Book Design Gold Award with a group of fellow designers for the book SHOW ME HOW.

The Space Shuttle Program's last flight blasted off yesterday in Florida for a 12 day mission to the International Space Station.  The lift-off of Space Shuttle Atlantis marks the end of America's 30 year old Space Shuttle program.  It has been a fruitful 30 years of labor, highlighted by the Hubble and the International space station, and I salute all the astronauts, engineers, scientists and support crews of NASA for a job well done!  Your work will benefit us all.
Here is brief video of that historical launch:


Here is a tribute video with Hi Def images of various shuttle launches:

Nothing combines photography and technology more perfectly than "space photography" -- the final frontier.  I happen to be an avid fan of both.

Speaking of technology, Space Shuttle Atlantis is carrying two IPhone 4s aboard its last mission loaded with the new SpaceLab App for iOS. The App is designed to utilize IPhone 4's cutting-edge capabilities including the 3-axis-gyro, accelerometer, retina display, cameras and A4 processor.

The IPhones will be used to conduct 4 experiments:
- An experiment will measure the distance and exact location of the iPhone in relation to the Earth’s center.
- Calibration of the three-axis gyro and accelerometer to make subsequent measurements more accurate.
- Calculation the longitude and latitude of the spacecraft multiple times to predict the spacecraft’s path of orbit.
- To monitor and categorize how radiation affects the iPhone.

The goal of the SpaceLab App is to gather as much data as possible now to aid in developing more advanced mobile applications in the future.
Here is a gallery of my favorite photographs from 30 years of Space Shuttle missions.  Enjoy!:
Read more »
Posted by Atom at 1:44 AM No comments: