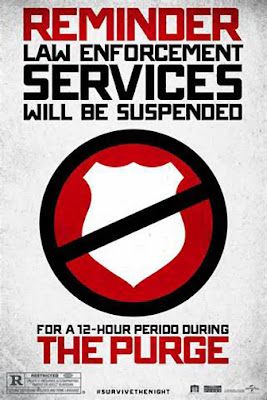 Imagine living in a society where murder is legal one night a year...

"The Purge" is what can happen in the United States (or anywhere) in the near future, if 'freedom' is taken to the extreme.  Violence and murder are legally sanctioned by law to promote peace and economic health.  Sounds crazy?  I thought so too, when the movie began.
But the idea is intriguing none the less.   If we humans are really inherently violent, and that releasing our murderous impulses do result in relative peace and prosperity for the rest of the year, would it be justifiable to hold a 'hunting season' for killing en masse?  We sanction it for wildlife... and war... This movie makes us confront our darkside.  Just how far are we (collectively and individually) willing to go? 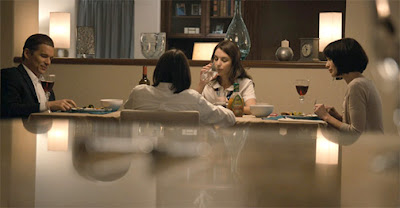 The family enjoying a brief calm, before the storm
A dystopian horror story set in the home of a relatively average (2.5 kids) upper middle-class suburban family, "The Purge" took me by surprise.  The plot is fairly simple: the father, a successful home-security specialist, 'locks-down' his house like an impregnable fortress for the 'Night of Purging.'  Given how the character is introduced and how the neighbors were acting, you knew right from the start that there was going to be an attack on him and his family that same evening.  The only questioned that remained was how will this attack be perpetrated, given the built-in barricade and state the art security system he installed his house?

The 'fortress' like house in the movie
The answer... through the kids.  Without them there would be no story and no movie to speak of.  I happen to have two kids, one girl one boy, exactly like the family in the movie, with roughly the same ages.  I may just have identified with Ethan Hawke's character too closely, but it certainly gave me pause for thought on how I can better educate my own given the moral dilema his character (James Sandin) was faced with. 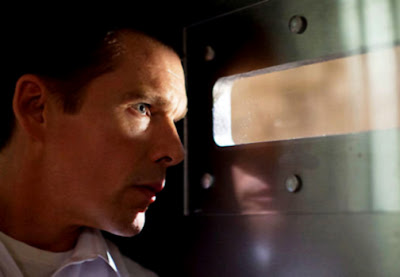 James Sandin contemplating the fate of his family
His daughter was the first chink in his armor.  A teenager going through puberty, she is bored and unwilling to go along with their usual family routine.  Aside from her already stereo-typical teen angst, she has also fallen in love with a boy her father flatly disapproves of.  The boyfriend sneaks in with a gun that same evening to confront her father about their love-- the proverbial 'snake in the nest' dilema.  At first, I thought that the movie was playing towards the 'hostage' scenario I have seen in so many other films, where the boyfriend (or captor) abuses his hosts, maybe even calling in a couple of his friends to join in the fun.  But I was mistaken, it was just an appetizer for things to come.
Read more »
Posted by Atom at 7:44 PM 1 comment: