Mel Brooks Finally Gets A Star 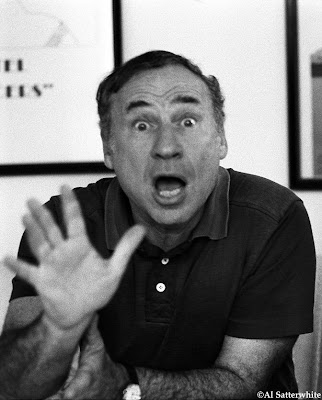 Mel Brooks finally gets a star on the "Hollywood Walk of Fame" in Hollywood Blvd.

In a ceremony last Friday in front of the Egyptian Theatre, the 83 year old Actor/Comedian/Composer/Screenwriter/Producer and Director was in top form, entertaining the crowd with songs and jokes he is well known for.

A much anticipated addition, the famous boulevard would be incomplete without a "star" from this Emmy, Grammy, Tony and Oscar award winner. It is the 2,406th star awarded by the city of Hollywood to a media celebrity.

--Photo by Al Satterwhite. Video from Youtube.com by deadend4chris.
Posted by Atom at 7:07 AM No comments: 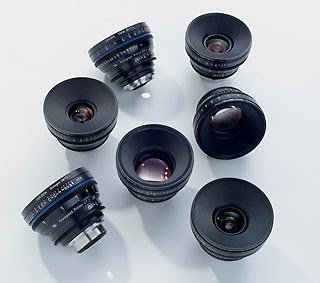 I have been high on HDSLR technology for the past year. But I did not expect it to catch on this fast.  Carl Zeiss has just endorsed this growing market segment with a professional line of lenses specifically geared to these lightweight hybrids.

The company just introduced a new line of lenses with interchangeable lens mounts called the CP.2.  It offers great flexibility, enabling the filmmaker to use just one set of lenses for both traditional film and professional digital cameras as well as for HDSLRs.  Currently, the lenses are only available in EF (Canon) and PL mounts, but will soon be adaptable to the F (Nikon) mount as well. 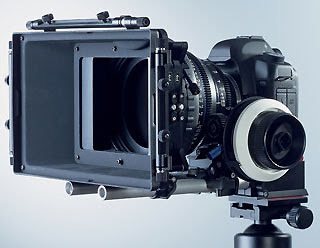 The current lens range are as follows: 18mm/T3.6, 21mm/T2.9, 25mm/T2.9, 28mm/T2.1, 35mm/T2.1, 50mm/T2.1 and 85mm/T2.1.  All the lenses cover the full-frame image format (24 x 36mm), ANSI Super 35 and normal 35 image formats except for the 18mm which only covers Super 35 and normal 35.  The line features standard housing dimensions, standard focus and iris gear positions, longer focus rotation, consistent front diameter and manual focus -- features found in high-end professional cinema lenses. It also features a nine-blade iris and a "sweet-spot effect" for APS-C sensors. Coupled with superb Zeiss optics, these lenses are the perfect lenses for any cinematic or commercial application.

The individual prices are currently unavailable, but would probably range from $3,800 for a single lens and up to $28,000 for the current set.

Here is an interview by Cinema5D in this year's NAB on the new Zeiss lenses:


--Photos from Carl Zeiss Cinematography. Video by Cinema5D from You.Tube.
Posted by Atom at 9:38 PM No comments: 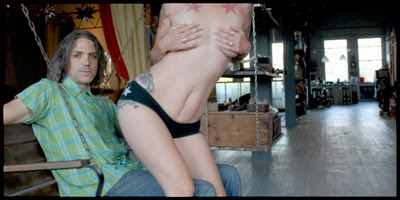 Wayne Martin Belger in his studio/workshop
Fine Art photography can be as unique and original as the artists themselves.  A few can be more extreme than others, if not in technique or concept, at least in approach.
Wayne Martin Belger's approach to his work is both unique and intriguing at the same time.  Instead of concentrating on technique, which most of us are concerned with, he has chosen to concentrate on the camera itself as an expression of his art.  Reducing technique to its most elemental form, pinhole photography, he turns our attention to the "camera" as the very subject and object of his art -- a metaphorical prism through which we can examine his subjects and gain a deeper understanding of his personal perspective and vision.
Born in Pasadena, California to religious parents, Wayne became interested religious rites and sacred practices when he was still a boy.  He became accutely facinated with the ritual tools used by the priests and holy men that enabled direct communion with the divine.  Employing the same materials used in sacred rituals by priests and shamans, metals in combination with organic parts (blood, bone, organs), he builds cameras that enable him to be in direct communication with his subjects.
Wayne starts each project by studying and researching them.  He then visualizes the photographs and starts collecting parts, artifacts and relics related to the subject.  He then builds a camera for each of his projects.  Some of the materials he has employed in his cameras are: Aluminum, Titanium, Copper, Brass, Bronze, Steel, Silver, Gold, Wood, Acrylic, Glass, Horn, Ivory, Bone, Human Bone, Human Skulls, Human Organs, Formaldehyde and HIV+ Blood.
As a photographer and camera collector, I am naturally drawn to Wayne's art -- it inspires me and gives me ideas for my own work.
Here is a good selection of Wayne's cameras and a photograph he took with each one of them:
Warning: Wayne's subject matter and material can offend and infuriate people with delicate sensibilities. Like any good work of art, it requires an open mind, so please proceed accordingly.
HIV Camera : 4"x5" camera made from Aluminium, Copper, Titanium, Acrylic and HIV positive blood. The blood pumps through the camera, then in front of the pinhole and becomes Wayne's #25 red filter. Designed to shoot a geographic comparison of people suffering from HIV. 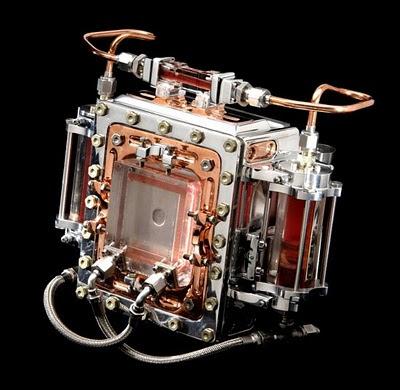 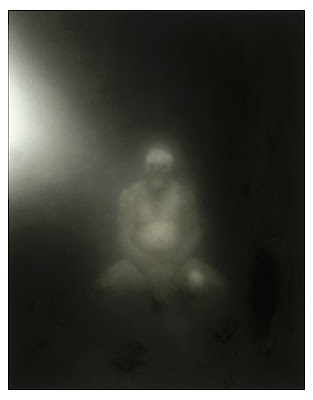 Third-Eye Camera : 4"x5" camera made from Aluminium, Titanium, Brass, Silver, Gem Stones and a 150 year old skull of a 13 year old girl.  Light and time enters at the third eye, exposing the film in the middle of the skull. The camera was designed to study the beauty of decay. 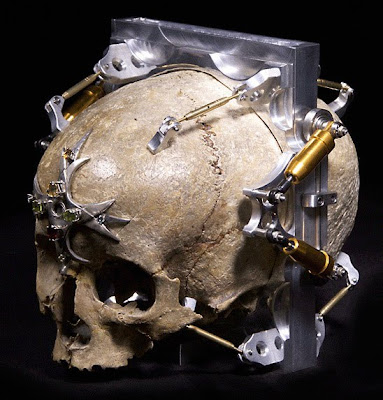 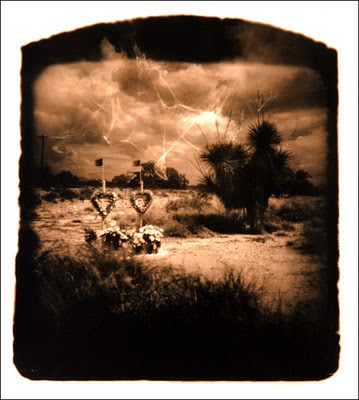 After doing some storyboarding for my movie projects and realizing that I can still somehow draw, I decided to personally illustrate my first Graphic Novel idea.  It might take a year or more to finish one book (at the rate of about three pages every a week).  But it would give me complete control over my story.  At first, I wanted to write a novel based on my "serialized" story idea. But I finally decided on the "illustrated format," primarily because it is much more "cinematic."

Though I still photograph a lot, I have also been immersed in a lot of doodling these past two months... Pencils and pens... Charcoal and ink...  Unlike photography, which creates a complete image at the click of a shutter, illustration is more slow and microscopic... almost meditative.  Composition is very deliberate and conscious, that you get totally immersed in every stroke and line.

I saw this animated trailer of Neil Gaiman's new book, "Instructions" with pencil drawings magically transforming into beautifully rendered colored illustrations, and I thought to myself how wonderful it would be if the reality of creating Graphic Novels was as easy.  The book, appropriately, is an instruction manual on how to successfully navigate through a treacherous and deceptive fairytale landscape.  Exactly what I need to guide me safely through the treacherous and deceptive landscape of my own imagination.