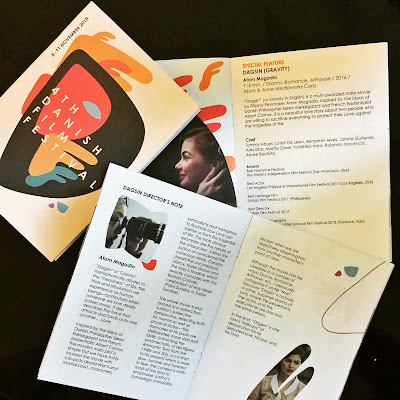 Souvenir Program for the 4th Danish Film Festival
An excerpt of my Artistic Statement/Director's Notes for DAGSIN was published publicly for the first time in the 4th Danish Film Festival's (Manila) Souvenir Program. The article outlining my artistic considerations and directorial approach in constructing the movie was originally a part of the dossier we submitted to the Cinemalaya Selection Committee in 2015.
Sponsored by the Royal Embassy of Demark, the yearly Danish film festival gives Filipinos a chance to sample the newest crop of award-winning Danish movies. This year, aside from 8 Danish films, the Embassy decided to include the first Filipino Movie in its line-up-- DAGSIN. Unknown to most Filipinos, DAGSIN was directly inspired by the ideas of Danish Philosopher Soren Kierkegaard and French Existentialist Albert Camus. A fan of Kierkegaard, Danish Ambassador to the Philippines Jan Top Christensen thought that DAGSIN would be a perfect fit to illustrate the goodwill and healthy relations that has existed between our two countries for more than a century.
Knowing that the audience might get confused at the inclusion of DAGSIN in their festival, Danish Cultural Officer Angelo Cruz made it a point to include an excerpt of my Notes in their Program. We never openly advertised these ties to Kierkegaard and to Camus thinking that they are not particularly relevant to the overall public perception and enjoyment of our film; but now that it is out there, we hope that you now watch DAGSIN with the added appreciation for the thought and meticulous craft we invested in making this movie. 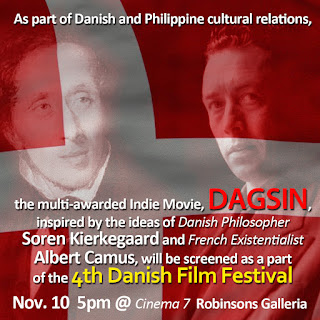 
"Dagsin" or "Gravity", alludes to the “heaviness” of life, the trials and tribulations we experience as human beings. It refers to the heaviness we feel when we are burdened by life and all its tragedies— the weight of emotion that assails us, when someone we love dearly passes away or when we are weighted down by unresolved guilt. Gravity also metaphorically describes the force that attracts and binds us to one another… Love.

Inspired by the ideas of Danish Philosopher Søren Kierkegaard and French Existentialist Albert Camus, the movie's main plot is simple but we have richly layered the movie with sub-plots (World-War II and Martial Law), characters, symbolisms and metaphors to illustrate how Love can shelter us from the tragedies of life. The most obvious examples are the names of the characters: Justino (for Justice or conscience/the conscious mind), Corazon (heart/the unconscious), Mercy (God's Mercy), Nurse Grace (God's Grace), etc.; and of course the story’s timeline, which exactly coincides with Holy Week (Palm Sunday to Easter Sunday).

The whole movie is shot, paced and edited from Justino’s subjective perspective, reflecting both his mental as well as physical states— the memories of his youth are deliberately more vivid and idyllic (mimicking the sentimentality of old Filipino Romantic films from the 1940s and 50s), in contrast to his present which is more slow, somber and funereal in feel. The camera is static most of the time to emphasize Justino’s paraplegic immobility, except when we are objectively observing him from another character’s point of view.

I used the location itself, an old mansion, to magnify Justino's predicament. Grand but now nearly abandoned and falling apart, the house mirrors its owner, who is now old, worn-out and nearing his end. Like a ghost, Justino wanders within the shadows of his past entombed in this mausoleum of memories.

Although the movie can be classified in a number of ways: Drama, Romance, Arthouse, etc., I personally categorize it under "Noir," because "Dagsin" is actually a crime, suspense drama of sorts, where the perpetrator, the victim and the executioner are one and the same person. A respected and venerated Judge during Martial Law who compromised his integrity in exchange for the safety of his wife, Justino's conscience now haunts him and insists on passing judgment on his past sins.


In the end, “Dagsin” is one man's "soliloquy" of desperation for his departed love, his soul and his God.

*This statement was a part of the dossier submitted to the Cinemalaya Selection Committee in 2015 and its excerpt (highlighted in yellow) was first published in the souvenir program of the 4th Danish Film Festival in Manila hosted by the Royal Embassy of Denmark.