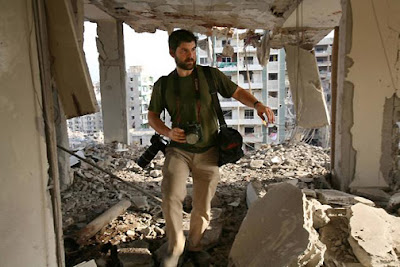 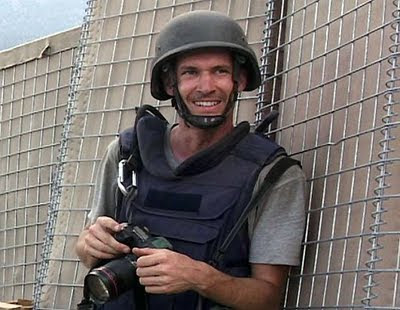 Tim Hetherington in the War Zone
Last Wednesday, two top photojournalists were killed in the rebel-held city of Misrata in western Libya.  Libyan dictator, Moammar Gadhafi had intensified his weeklong assault on Libya's third largest city.  The photojournalists were traveling with some rebel fighters to cover an incident in Tripoli street, where some of the most intense fighting had occured in recent weeks.  During a skirmish, Hetherington was hit by a rocket-propelled grenade, while Hondros died from severe brain trauma from a shrapnel.
I admire photojournalists not only for their courage and commitment, but also for their invaluable service to humanity and history in general.  These dedicated chroniclers of our collective experience, gives us windows into the human experience, both good and evil.  I tend to concentrate on the good side of life, but I never forget the darker side of humanity -- thanks to the courage and dedication of fellow photographers who cover conflicts, wars and devastation of every type.  The News photographer/photojournalist is a special breed, half artist/half warrior.  Chris Hondros and Tim Hetherington were the best of this breed.  They went in harms way to give us a glimpse of the horror around us, through their uncompromising artistic eye. 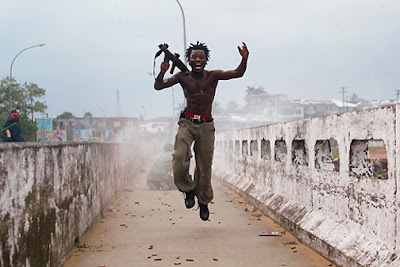 One of Hondros's award winning images
Chris Hondros was born in New York City to immigrant Greek and German parents, survivors of World War II. He studied English Literature at North Carolina State, and took his Master's degree from Ohio's School of Visual Communications.
He had covered most of the World's major conflicts since the late 1990s and was on assignment in Kosovo, Angola, Sierra Leone, Lebanon, Afghanistan, Kashmir, the West Bank, Iraq and Liberia.  His work had graced the covers and front pages of Newsweek, the Economist, the New York Times, the Washington Post and the Los Angeles Times (and had been syndicated in publications world-wide). 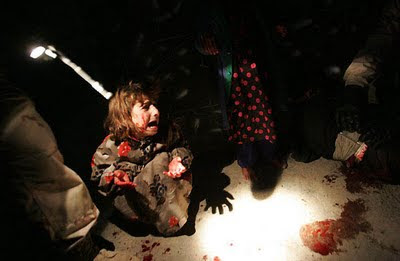 Another intensely compelling image from Hondros
Chris was a multi-awarded photojournalist who had been awarded the Robert Capa gold medal in 2006 (war photography's highest honor), multiple honors from the World Press Photo, International Pictures of the Year Competition, the Visa Pour L'Image in France, and the John Farber award from the Overseas Press Club. In 2004 he was nominated as a finalist for the Pulitzer Prize in Spot News Photography and 2008 he was a National Magazine Award finalist.  Aside from photography, he also wrote for the Virginia Quarterly Review and was the editor/publisher of The Digital Journalist.  He was also a frequent lecturer and essayist on issues of war. 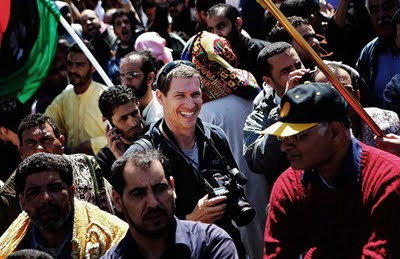 Tim Hetherington at work
Tim Hetherington was born in Birkenhead, England.  He was educated at Stonyhurst College and took literature at Oxford.  He studied photojournalism under Daniel Meadows and Colin Jacobson in Cardiff.
Hetherington spent a decade in West Africa documenting political upheaval in Liberia, Sierra Leone, Nigeria and its neighboring countries.  During the second Liberian Civil War, he and his colleage James Brabazon were the only foreign journalists to live behind rebel lines, which resulted in an execution order from then President Charles Taylor.  His was a regular contributing photographer for Vanity Fair magazine.
Aside from being a photographer, Tim was also a gifted filmmaker. His 2010 documentary film collaboration with writer Sebastian Junger received the Grand Jury prize for best documentary at the 2010 Sundance Film Festival and was nominated for an Academy Award for Best Documentary Feature this year. He also received the 2009 Alfred I. duPont Award in broadcast journalism and 2008 Rory Peck Features Award for his broadcast work titled "Afghanistan - The Other War." 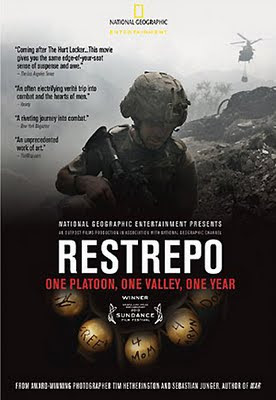 Hetherington's documentary film "Restrepo"
Two very promising and talented visual artists lost... casualties of one Dictator's unrelenting need to stay in power, no matter the cost!  Such a waste:(  But few among us would be more familiar with the dangers of war than Chris and Tim.  Both were as professional as photojournalists could ever be.  They are real heroes in the best tradition.  Like true warriors they charged against the enemy, but instead of taking lives they gave theirs so that the rest of us can put a face to the evil that plagues all of us -- in our hearts and in our minds.
Chris Hondros Picture Portfolio

--Portfolio Galleries courtesy of Newsweek.com and the Daily Beast.com
Posted by Atom at 8:33 AM