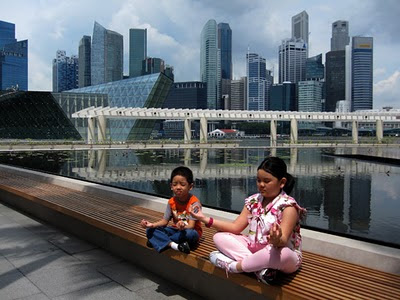 My wife and I took our family to Singapore for a minivacation last week with my mom. The kids have been working hard in school and we all needed a break from our regular routine.  Singapore turned out to be the perfect destination for all of us -- it was just three hours away and it had a lot of new attractions we have not yet seen. 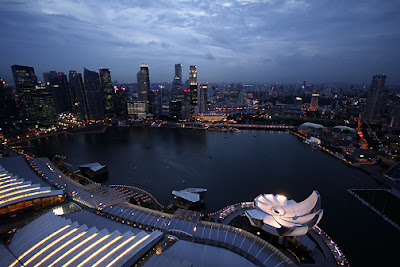 I have been to Singapore several times, but my last trip was more than 10 years ago.  The city has grown considerably and is now one of the top Asian tour destinations in Southeast Asia.   We just stayed for a week, but we enjoyed every minute of it. 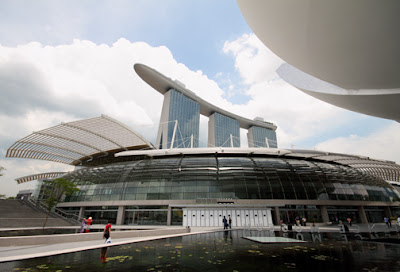 The Marina Bay Sands Hotel/Casino and Mall complex
One of its newest attractions is the Marina Bay Sands complex.  A bustling city within a city, which boasts of a one of a kind hotel/casino building with a ship-sized structure on top (worlds largest cantilevered platform) that houses restaurants, infinity pools and a spa with a 360 degree view of the city. 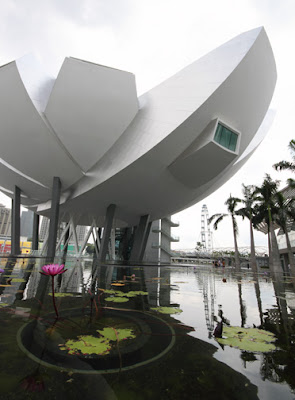 The "lotus like" Art & Science Museum of Singapore
The complex also has a beautiful mall (the Shoppes Mall) that houses luxury shops like Cartier and Louis Vuitton as well as 7 celebrity Chefs restaurants and a skating rink.  It is also home to Singapore's new state of the art Art & Science Museum as well as two world-class performing arts theatres and a huge convention center. 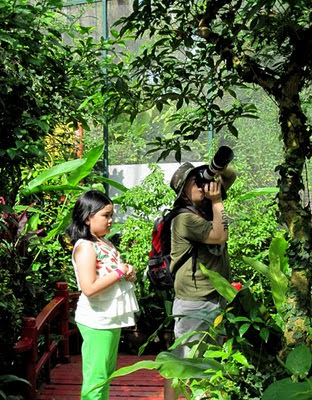 Shooting butterflies (shot by Anne)
Less picturesque but just as spectacular (occupying 121 acres), is Resorts World Sentosa which hosts Universal Studios Singapore.  The resort is still in varying stages of construction, but it will eventually be the home of 6 world-class hotels, a water park, a marine park and a maritime museum.  This certainly is not the same Singapore I visited 10 years ago.
Aside from these two grand resort developments we spent a lot of time in Underwaterworld Singapore, the Singapore Zoo and the Butterfly Park & Insect Kingdom.  Aside from the kids, I had a lot of fun photographing the different species of animals and insects for my own print series.  I came back with hundreds of photographs.  A lot of which, won't been seen publicly for years...
--Shot with a Canon 7D with various lenses.
Posted by Atom at 3:34 AM

Awesome blog man, the things you have mentioned above are really informative and are examples of your awesome writing skills and a good blog.
London vacation rentals

My cousin recommended this blog and she was totally right keep up the fantastic work!
Web Design in Singapore