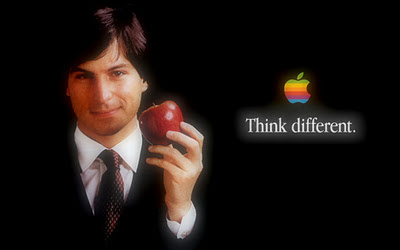 Steve Jobs - computer icon, media innovator and Apple Computer co-founder, died early today at age 56 after battling pancreatic cancer for several years.  He stepped down last August after handing the reins of the company to current Apple CEO, Tim Cook.  A Beatles fan, Steve named the computer company he co-founded with Steve Wozniak after the Rock group's Apple Records label.
An innovator, more than an inventor, Steve changed the media landscape forever with masterful products like the Apple II - the first commercially successful personal computer, the Macintosh - the first commercially viable graphical user interface PC, the iMac and the Powerbook - which changed how computers are packaged, the iPod - which transformed digital music players, iTunes which revolutionized how music is sold, the iPhone - that defined the next generation of smart phones and finally the iPad - which has created a new and growing segment in the PC industry.  Aside from these, he was also the founder and CEO of Pixar Animation Studios (sold to Disney in 2006), which led the digital animation Features revolution we are currently enjoying.
An uncompromising perfectionist, Steve orchestrated his products from the development and design phase, all the way to its packaging and marketing strategy.  His pursuit for aesthetic perfection bordered on the extreme.  He is famous for his "insanely great" aesthetics in product design and packaging; his Apple Stores are some of the most striking retail outlets anywhere in the world; he even insists on beautifying the insides of his computers.  Infamous for immersing himself into the smallest details, his meticulously planned onstage product unveils are legendary.
Steve Jobs was an iconoclast of the 1st degree, comparable only to Edison and Disney.  Like most legends, he was able to accomplish so much at such a short time.  He will be missed, and we can only speculate about the many other wonders he could have achieved given more time.  But his legacy continues on through his company (including Pixar), through his products and through his example - of a life lived to the fullest.  He truely exemplified what he preached, " Think Different."
Posted by Atom at 6:26 PM