Grounded 1: Meditations On The Terra Firma 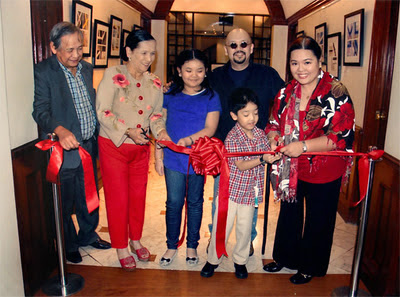 Ribbon-cutting for "Grounded 1" last Dec. 7
I have been a practicing Photographer for more than thirty-three years.  Photography started out as a hobby at the age of eleven, and it has been a constant presence in my life ever since.
When I turned professional five years ago, I decided to keep a part of my photography personal and experimental.  “Grounded: Meditations on the Terra Firma” is my first Series dedicated to the original impulse I had when I received my first camera -- to explore the medium of Photography and to use it to see our world in a different way.
I decided to start this personal (experimental) photographic journey at its core.  Light, shadow, texture, line, shape, color and composition comprise the most basic elements of the visual arts -- the fundamental building blocks of Photography.  “Grounded: Meditations on the Terra Firma” is pure photography, concentrated on the most essential elements of the Art.  All the photographs in this Series were shot as is, without photo manipulation.* 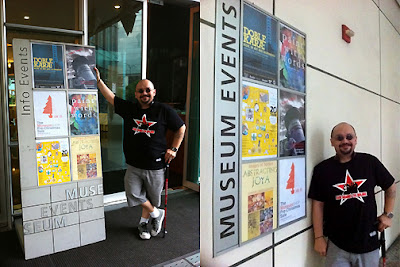 Beside the "Grounded" Exhibit poster in Ayala Museum
I opted to use a simple camera from the onset, devoid of any controls, to force myself to focus on these crucial elements.  I ended up using an IPhone, instead of my Holga or my Polaroid cameras, because my cellphone is always with me.  It is the modern day counterpart of the Polaroid and the Instamatic camera, and everyone is familiar with it (very few remember what Polaroids are).  After all the camera, no matter how simple or complex, is just a gadget that captures images.  It is our ability to ‘See’ and delight in what we see that dictates what we photograph.
“Grounded: Meditations on the Terra Firma” is also my initial foray into Abstract Photography.  Inspired by the avant garde work of Aaron Siskind, I wanted to retrace the possibilities of  Abstract Expressionism in Photography.  Siskind deliberately obscured his subject matter by concentrating on form, texture and simple visual elements to push Photography into the realm of abstraction; Simple and direct, without employing elaborate tricks and gadgets.  Upon discovering the possibilities of abstraction Siskind exclaimed, “For the first time in my life subject matter as such, has ceased to be of primary importance.  Instead I found myself involved in the relationships of these objects, so much so that the pictures turned out to be deeply moving and personal experiences.” 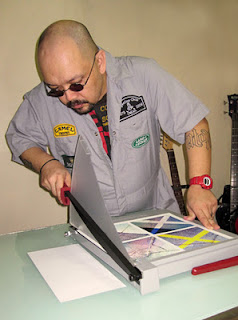 Preparing the Prints for the exhibit
I was walking down Hollywood Blvd. one afternoon, when it dawned on me that the pavements on this street are probably the most photographed side-walks in the whole world -- Pavements normally ignored, but have transcended the mundane by virtue of the names and hand/footprints of the media celebrities imprinted on them.  Why not photograph regular pavements and celebrate them in the same manner?  Aaron Siskind had a series of photographs of ‘tar-marked asphalt roads (his last Series 1986-88),’ which he elevated into Abstract Art -- because they contain interesting calligraphic-like elements that most people overlook.  Since Siskind’s photos were mostly in Black & White, I became excited by the thought of doing mine in color -- a small but significant variable that can heighten visual impact.
“Grounded No. 1” was born.  Seventeen different Los Angeles Cities ‘abstracted’ in a quatrain of photographs like the stanza of a poem ...distilled from the most basic visual elements of the ground we work and play on.  Gravity grounds us to the earth and nothing is more constant in our lives than the firmament beneath us.  Art exists around us, if we just took the time to ‘Look and See.’  “Grounded” is my photographic meditation on the Terra  Firma, the terrain we live and walk on.
*Technical Notes - I used an IPhone App. called ‘Camera Bag’ in the ‘Lolo’ setting to heighten saturation -- a digital approximation of Medium Format Color Reversal Film (square format). But the pictures remain as they were originally shot (no tweaking in Photoshop), with color gradations reflecting the natural daylight color temperature shifts during the time of the day they were captured. No special lenses or attachments were used.
We formally opened the Exhibit at the Filipinas Heritage Library last Wednesday, December 7.  My mother and my wife, the two women who have supported my art wholeheartedly, were kind enough to honor me by cutting the ribbon for my first solo-show.  Here are some photos from the Opening Reception:

Is it amusement or perplexity? ...I cannot tell.

Raffling three framed prints from my next Series, "Fera."
We raffled some T-shirts and three framed prints from my next Series on wild animals, called "Fera."  The second and the third prizes were camera originals of birds (Egret and Flamingos).  The first prize was a "photo-graphic" print from the series titled, "Winter Spirit" (Snow Leopard).  My son picked the winners and my daughter announced their names. 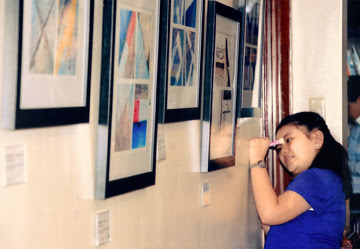 Aria hard at work
My daughter, Aria, took orders all night long.  Her charm helped us sell a lot of prints that evening. 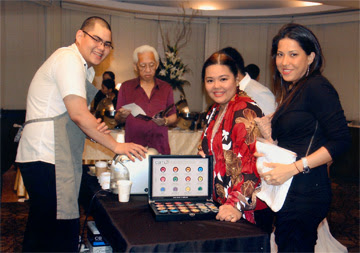 Coffee Bean and Tea Leaf at the Opening
We had a scrumptious buffet catered by Brasserie 21 as well as champagne and wines.  Special thanks goes to Coffee Bean and Tea Leaf, who provided us with exceptional coffees and teas, as well as marketing assistance.
To all our guests, thank you for sharing the evening with us.  For those of you who could not make it, please come by and see the prints...
The Limited Edition Prints will be on exhibit until January 6, 2012, and can be purchased (framed or unframed) by calling the Ayala Foundation, Inc. at +63 (2) 8921801, fax +63 (2) 8921810 or email cruz.ct@ayalafoundation.org.  "Grounded 1 (Los Angeles): Meditations on the Terra Firma" will be available for sale on my webgallery site www.atommagadia.net early 2012.
Posted by Atom at 5:55 PM

Congrats on the successful show Atom.

Thanks. If you told me you were actually here in the Philippines around that time, we could have at least gone out for lunch or something. Well, maybe next time...