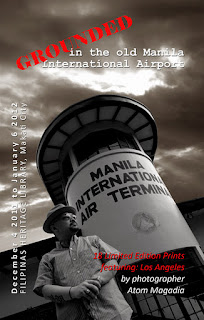 My new Fine Art Photo Series - "Grounded," will finally be shown to the public.  This first installment of an ongoing Series, is a collection of 18 Art Prints featuring photographs of Los Angeles County streets assembled in a quartet.  Inspired by the avant garde photography of Aaron Siskind, "Grounded" revisits the possibilities of Abstract Expressionism in photography, using the most elemental ingredients of light, shadow, color and texture.
The Prints will be on display from December 4 (Aaron Siskind's bday) to January 6 in the Filipinas Heritage Library, the historic 1930s Manila International Airport in the heart of Makati (the Philippines' central financial district).  The venue was the country's first international airport and served as the headquarters of the U.S. Army Airforce during World War II.
Press Release:
The artist’s first series explores the philosophical difference between "looking" and "seeing." The frames take the viewers through a walking tour of the City of Angels. Mindfully capturing the most basic elements in the streets and side-walks of each enclave, Atom endeavors to encapsulate the rhythm distinct to each city, through natural light, shadow, color and texture.
Foregoing his usual trunk loads of camera gear, Atom streamlined his equipment with just the camera imbedded in his iPhone to shoot different walkways, streets and pavements for this series. A published editorial photographer, whose works have been featured in many of the country’s top fashion and lifestyle magazines, he is deliberately going against the usual trend of using professional-grade equipment, to emphasize the most basic element of photography – the art of seeing.
Gravity grounds us to Earth… and nothing is more constant in our lives than the ground we walk on. Paying homage to the works of master photographer Aaron Siskind, Atom reframes elements from the ground--up. “Grounded” is Atom’s meditations on the Terra Firma, the terrain we work, play and live on.
PLEASE COME AND VISIT THE EXHIBIT!
Posted by Atom at 4:04 PM