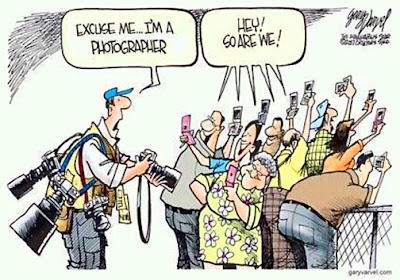 One of the biggest stories of the New Year, is Eastman Kodak's recent bankruptcy filing.  It made headlines the world over because it symbolizes the end of an era-- the end to the Age of Film Photography.  To film users everywhere, it was a death spell.  As a fan and Kodak film user, I mourn the good old days when film was the norm and great film stock was available everywhere.  I started my exploration of photography on Kodak film when I was a young boy.  As a film student in Art Center College, I used to buy my film stock directly from Kodak Hollywood in Santa Monica Blvd.  With Kodak forced to recognize its need to reorganize, film stock will soon become scarce (at least Fuji Film is still doing business) and film prices would surely skyrocket. Film photography will become more specialized and rarified.
But this Bankruptcy was not a surprise to anyone, everyone was expecting it to happen sooner or later.  The paradigm shift to digital photography has been happening for the last 20 years.  Eastman Kodak was just not savvy enough to remain on the forefront of the digital photography technology in the last 10 years, because it was busy concentrating a lot of its resources on mounting an aggressive stance to defend its shrinking core film business.

The first Kodak digital imaging system built in 1975
Very few people know that Kodak built its first prototype all-digital camera in 1975.  The camera had a working CCD imager which digitize the captured image on a standard cassette tape.  The data was read by a playback device that interpolated the 100 captured lines to 400 lines, then generated a standard NTSC video signal, which can be viewed a television set.  In 1986, Kodak came up with the first megapixel sensor.  The company released 7 digital imaging products in 1987, capable of recording, storing, manipulating, transmitting and printing electronic still video images.  In 1990 it came out with the Photo CD system and proposed "the first standard for defining color in the digital environment of computers and computer peripherals.  In 1991, it released the first professional grade digital camera system (DCS) using a Nikon F3 body with a 1.3 megapixel Kodak sensor.  The company was in the forefront of the digital photography revolution, decades before companies like Samsung and Casio built their first digital camera.  So what happened? 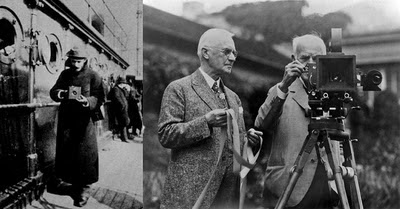 George Eastman with his first Kodak camera; Eastman testing film in early Hollywood
George Eastman, the founder of Eastman Kodak Co., invented the first commercially viable roll film and the first compact Kodak Camera (utilizing the roll film), which made photography accessible to everyone more than a hundred years ago.  Before Eastman, photography was a specialized field reserved for the professional and the dedicated hobbyist, who utilized large unweildy wooden mechanical cameras using self prepared glass based emulsions they personally processed/developed in their own laboratory/darkrooms.  With the Kodak cameras of Eastman, the preloaded cameras were shipped back to Kodak to be processed; The cameras were then shipped back to the customer loaded with a fresh roll together with the newly printed pictures.  Kodak's roll film also contributed to the development of Motion Pictures and Cinema at the turn of the century.  For nearly 100 years (1892-1992) Eastman Kodak Co. led the way, dominating both the still imaging (50+% film market share) and the movie imaging industries (90+% film market share).  Eastman was an entrepreneurial genius who can be compared to Henry Ford and to Steve Jobs in the magnitude of his contribution to humanity.  We will forever be indebted to his legacy to Photography and Imaging, and the company he founded. 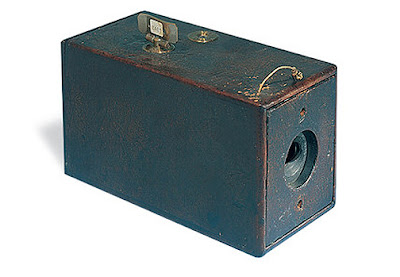 Eastman's first camera revolutionized photography
But like any gigantic enterprise in the history of humanity, be it an ideology, country or company, titanic entities become unweildy after a certain scale.  It just becomes to big for anyone to manage.  Some people blame bad decision making, some detractors say it was due to mismanagement, some critics blame obsolecence and the industry leader's propensity to safeguard it core business, while others point to the bad economy for the current state of Kodak.  But these are all judgements on hindsight, and bit unfair to the people who had the unfortunate job of leading and managing the behemoth.  I just believe that there is a natural limit to human affairs, and Kodak unfortunately, reached that limit.
We are now on a new era that demands a higher level of efficiency.  Digital imaging satisfies this requirement better than film.  Since our daily lives are more and more governed by money concerns, it is just natural for us to switch to a more cost efficient alternative.  Film as a medium, ceased to be relevant as soon as the CCD sensor became a reality.  Digital imaging is more direct and does not necessitate a volatile 'intermediate' like film stock.  If Kodak started producing cameras when that happened in 1975, they would have been way ahead of Sony and Canon in the digital market.  Learning from this error, Canon or Nikon should start developing a Smartphone business right now, because Smartphones are beginning to seriously affect the Sales figures of their consumer camera lines.  Steve Jobs was really ahead of the curve by going into the Smartphone business with the IPhone and ITunes-- in one move, he captured a newly developing cellphone/camera/music player industry.
I wish Eastman Kodak would finally get their affairs straightened out.  I hope they would also retain a small unit dedicated to film manufacturing, to service loyal film customers.  But this might all be just wishfull thinking, since corporations are in business to make profit and film manufacturing might not be lucrative enough in the long-run.  I do not believe that the company's current strategy of refocusing on professional/industrial digital printers will be a good long-term plan, since the traditional printing industry is also suffering from a shift to electronic digital media.  It would be a real shame to see George Eastman's company completely dissolved.  But we should all remember that photography did not start with Kodak, and it will continue on with or without the company.  It is just hard to let something, that has been a part of all of our lives for a long time,  just fade away.
Posted by Atom at 12:12 AM

thank you for posting more about the history of photography :)