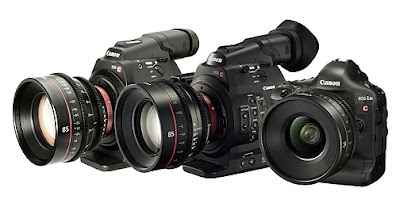 The Canon Cinema EOS family with the new C500 and the 1Dc
Yesterday, Canon, Inc. announced two new cameras they will be introducing at this year's NAB - the Canon EOS 1Dc and the Canon EOS C500.  The two new EOS Cinema EOS cameras (Super 35mm) are 4K capable, with support for uncompressed Canon RAW file (still for 1Dc and motion for C500). 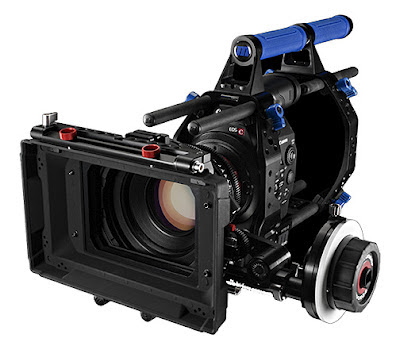 After the success of the hybrid 5D MKII and the 7D with Indie Filmmakers, Canon shifted its R&D to its products' video capabilities.  Last year, it created a new product line called Cinema EOS with the introduction of the C300.  Aside from pro-class cinema/broadcast cameras, the EOS Cinema family also features new pro-cinema lenses.  Faced with a shrinking consumer camera base (mainly due to cellphone cameras), the company is clearly shifting its focus to the professional motion imaging market. 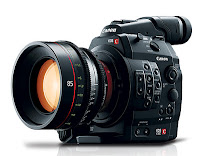 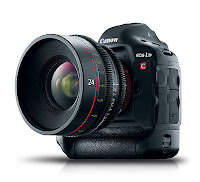 The new Canon 1Dc is the big brother of the Canon 1Dx. The first 4K capable Canon DSLR, the 1Dc features an 18.1 megapixel (Super 35mm) CMOS sensor that offers a wide range of sampling formats: 4K motion (4096 x 2160), HD motion (1920 x 1080) or 18 megapixel still. 4K is recorded as Motion JPEG and HD is recorded as H.264, while stills can be shot in RAW or JPEG. Aimed at documentary filmmakers, wildlife filmmakers/photographers and news/sports filmmaker/photographers, the camera offers incredible low-light capabilites, with optimum image quality even in the most under illuminated environments. Designed for extreme environments, it can capture 4K directly to CF cards at 24p at 8-bit 4:2:0. It is also features the 1Dx's weather-sealed rugged shell, as well as its still camera capabilites.  The current MSRP is set around $15,000 (subject to change). The Cinema EOS line of lenses
Aside from the two new cameras, Canon just introduced two new zoom lenses to its Cinema EOS line:  the CN-E 15.5 - 47mm T/2.8 L S and the CN-E 30 - 105mm T/2.8 L S.  Like the other lenses in the Cinema EOS line, they feature geared inner focusing, 11 blade aperture diaphragms, lens markings on both sides of the barrel, control ring resistance with consistent operating torque as well as consistent diameter, rotation angle and front lens diameter.

--all photos taken from www.usa.canon.com
Posted by Atom at 11:11 PM