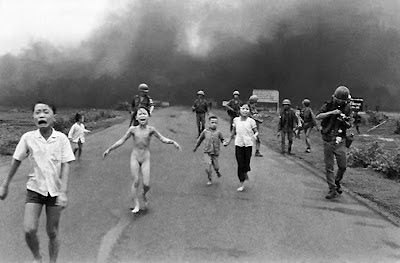 The Pulitzer Prize winning photograph dubbed "Napalm Girl," turned 40 this month.  When it was first published in June 8, 1972, 21 year-old Associated Press photographer Huynh Cong Ut (professionally know as Nick Ut) had no clue that his photo would one day become one of the most famous images of the 20th century, and how it will have a lasting impact on his life. 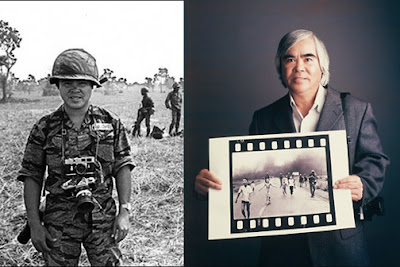 Nick Ut, then and now
Nick Ut became a photojournalist at the young age of 16, just after his brother Huynh Thanh My, an Associated Press photographer, was killed on assignment.  He was mentored by the legendary photojournalist Horst Faas (who recently passed away).
Nick was with some South Vietnamese troops on patrol near Trang Bang, when he witnessed the aerial bombing of a civilian village.  A South Vietnamese Skyraider plane bombing suspected Viet Cong hiding places, accidentally dropped its flaming napalm on South Vietnamese troops and civilians.  Surprised by the attack, he immediately trained his camera on the burning village.   Soon after, he heard screams from the villagers, among them children, running away from the devastation.

Another shot by Nick of the same scene
Among the panic-stricken children were Kim Phuc, her two brothers and her cousins.  Nine year-old Kim Phuc ran naked after discarding her burnt clothes wailing, "Too hot! Too Hot!"  Blobs of  napalm had incinerated her clothes and scorched her skin like jellied lava.  In her fear and confusion, her only thought was how ugly she's become and how she will never be the same again.  Screaming in panic, she ran out from the burning village into the main road, oblivious to everything else around her. 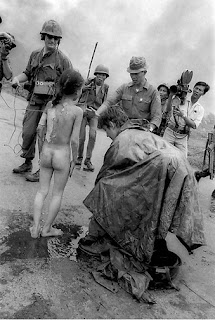 Luckily, Nick was there taking all these pictures.  He rapidly shot this sequence of photographs sensing that he is capturing "the horror of war" at play right in front of him.  “I cried when I saw her running,” he recounts.  "Then when she passed my camera, I saw her body burned so badly, I said, 'Oh my God, I don't want no more pictures'; She was screaming and crying, she just said, 'I'm dying, I'm dying, I'm dying' and 'I need some water, bring water';  If I did not help her; if something happened and she died, I think I’d kill myself after that.”  Nick drove  Kim to the hospital, and when he was told that she was beyond help, he flashed his American Press badge and insisted that they treat her anyway. 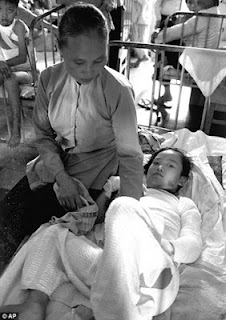 Kim Phuc two days after the incident
When Nick developed his negatives and the images of Kim emerged, most everyone feared that it would be rejected because of AP's strict policy against nudity.  But Horst Faas knew the value of the photograph, and insisted that it be published.
Kim Phuc survived the ordeal.  But 30 percent of her body was scourched raw by third-degree burns.  After suffering through 17 surgical proceedures, she was finally discharged (14 months after the bombing).  Nick visited her regularly until he was evacuated after the fall of Saigon.  Her life was hard under the new communist regime and medicines (painkillers) were hard to getby, for the extreme headaches and pains she still suffered.  But she persevered for several years, and she was eventually accepted to medical school to pursue her dreams of becoming a doctor. 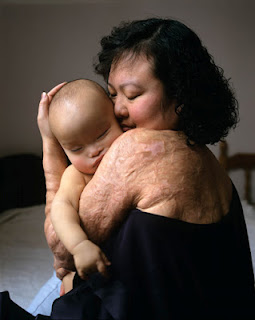 Kim Phuc's burn scars
But the fame of the photograph haunted her for many years.  Nick's picture won the Pulitzer Prize and was the World Press Photo of the year (1972) -- it became an icon of the Vietnam war.  President Nixon was even quoted on tape doubting the authenticity of the photograph, attributing it to 'left-wing' propaganda.  So when the communist leaders realized the value of "the Napalm Girl," she was forced to quit school and had to return to her province, where she was used by the regime to meet and greet foreign journalists.  But her words were scripted, and her interactions monitored and controlled.  During those dark years, she hated the fame the photograph gave her and secretly wished she perished in the bombing instead. 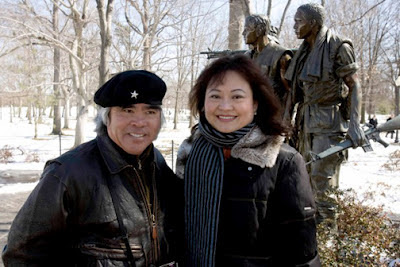 Nick Ut and Kim Phuc finally reunited after decades
But that same fame eventually turned into a series of opportunities.  With the help of a foreign Journalist, she was able to travel to West Germany in 1982 to receive medical care.  It also afforded her a chance to study in Cuba, where she finally met the man she was destined to marry.  They married in 1992; and during a refueling stop in Canada, after honeymooning in Moscow, they defected.  Kim was finally free. 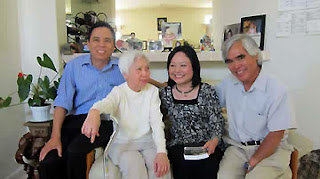 L-R: Kim's husband Bui Toan, Dr. Le My (the one who treated Kim), Kim Phuc and Nick Ut
It is a wonderful story, intiated by a 'horrific' image depicting war at its worst -- A tragedy that has a happy ending.  The picture is a masterpiece of Photojournalism that eloquently conveys a wealth of emotions, and at the same time is a potent trigger for our imaginations.  It is a rare photograph that can only happen when diverse elements synchronistically intersect at a precise point in time.  It is Photojournalism at its finest! 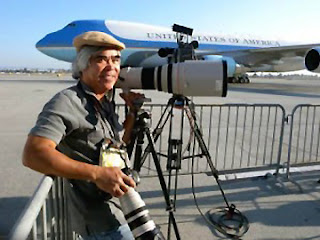 Nick on assignment
"The picture for me and unquestionably for many others could not have been more real. The photo was as authentic as the Vietnam war itself. The horror of the Vietnam war recorded by me did not have to be fixed. That terrified little girl is still alive today and has become an eloquent testimony to the authenticity of that photo. That moment thirty years ago will be one Kim Phuc and I will never forget. It has ultimately changed both our lives" --Nick Ut
Nick lives in Los Angeles and continues to work for the Associated Press. He continues to capture a lot of iconic images of international importance, many of them we have seen in newspapers, magazines and websites worldwide.
-- Photos courtesy of Nick Ut
Posted by Atom at 1:11 AM

Hello! I am a journalist from largest daily newspaper in Brazil´s capital. First of all, congratulations for the blog and the post. I really would like to talk with Mr. Nick Ut. Can you please send his contacts to me? My twitter is @rodcraveiro
Thanks!

Unfortunately, I cannot freely give Nick Ut's contacts. Please leave your email address and I will gladly forward your request to Nick, or you can write or call Anthony Marquez, AP LA Chief of Bureau at AMarquez@ap.org/(213) 346-3130 and ask Associated Press directly.

Please could you pass on the following link to Nick Ut:

It is a professionally recorded 'Song for Kim' by Sarah Lenney written in honour of Kim Phuc the girl in his picture. It has already been used in the UK and by the Canada Burns organisation.

I would love him to hear it.

I passed your message and link to Nick, and he said "thank you very much for the beautiful music... He loves this song for Kim." He posted the link in Facebook.

Nick will be with Kim Phuc in Germany in September.