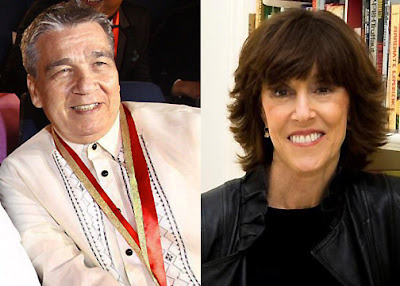 Writer/Filmmakers Mario O'Hara and Nora Ephron
Two of the writer/directors I greatly admired passed away due complications brought about by Leukemia last Tuesday (June 26); just a couple of hours from one another, half a world apart.  Award-winning Filipino Filmmaker (writer, director, producer) Mario O'Hara was admitted to a Manila hospital last June 15 for leukemia treatment (he refused blood transfusion, but underwent chemotheraphy), but died eleven days later at the age of 68.  Popular American Journalist/Filmmaker Nora Ephron died several hours after in a hospital in New York, of pneumonia from complications brought about by acute myeloid leukemia -- a condition she has been suffering from for a couple of years.  She was 71.
I join the thousands of fans and cinephiles the world over, in mourning the loss of these two talented artists.  Though they may have departed in body, their spirits live on in their art (body of work), and will continue to be a precious legacy for all of us to enjoy and learn from.
Posted by Atom at 2:22 AM