The Tragedy of Tony Scott 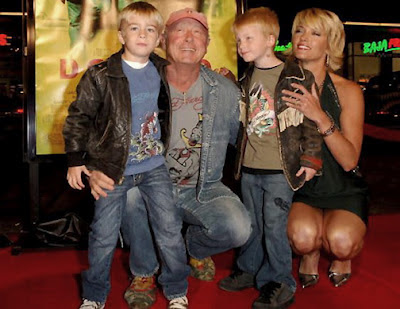 Tony with his 3rd wife, actress Donna Wilson and their twins.
Hollywood is again in shock... as one of its best and brightest takes his life on the pinnacle of his career.
Hollywood Blockbuster Director/Producer Tony Scott died yesterday (Aug.19), after jumping off the Vincent Thomas Bridge in San Pedro, near the Los Angeles Harbor.  According to eyewitness reports, they saw a man around noon park his Toyota Prius, climb the 8 foot fence and jump from the bridge.  Tony's body was found 3 hours later by search and rescue teams.  They found a suicide note in his office.  He was 68 years old. 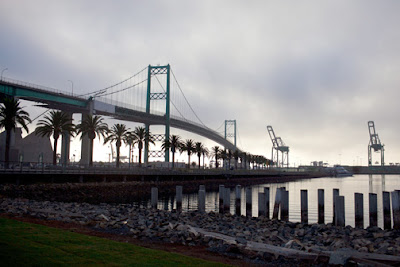 The Vincent Thomas Bridge where Tony committed suicide
It has been widely reported that Tony has an inoperable brain cancer (autopsy results are still pending), but according to TMZ, Scott's wife told investigators that the rumours are absolutely false and that Tony did not have any other severe medical issue that would have cause him to take his own life.  Friends close to him (including a host of Hollywood celebrities who have worked with him) also express their shock at the suicide, citing that Tony Scott was one of the most positive, energetic man they knew. 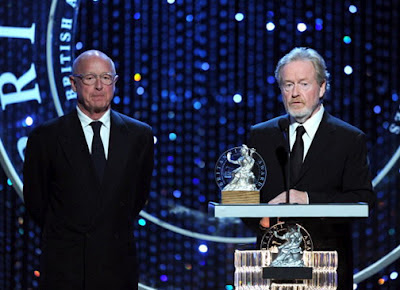 Tony (left) with brother Ridley (podium) accepting an award
Tony is the business partner and younger brother of Director/Producer Ridley Scott.  His film directing work include:  "Top Gun," "Beverlyhills Cop 2", "Days of Thunder", "The Last Boy Scout", "True Romance", "Crimson Tide", "Enemy of the State", "Spy Game", "Man On Fire", "Domino", "Déjà Vu", "The Taking of Pelham 123" and "Unstoppable".  He directed more than a thousand TV commercials.  He also produced movies and television shows including "The Good Wife", "Gettysburg", "Numb3rs", "Labyrinth" and the mini-series "Coma".  Tony had more than 30 projects in development when he died, including several directing projects like "Top Gun 2," "Narco Sub," "Emma's War" and "Hell's Angel."
Hollywood and film fans worldwide mourn the loss of this wonderful filmmaker.  We could only wonder at what possessed him to take his own life at such a prolific stage.  A thrill-seeker by nature and a director who portrayed characters winning against all odds, Tony opted to end his life on his own terms.  Is it tragic or is it heroic?  Only he will know.  Ron Howard simply sums it all up, "No more Tony Scott movies. Tragic day."
Posted by Atom at 7:07 PM