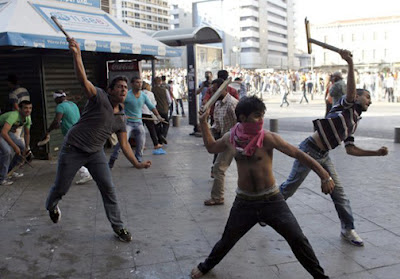 Rioters in Greece protesting against the video "Innocence Of Muslims"


In the wake of the recent worldwide riots in the Muslim world, I have been scrutinizing the power and the influence that media has in our modern global society. That one poorly produced and badly done video can have this much impact, is a very blatant warning to all of us. We must all start becoming more responsible and conscious about what we create and spread to the general public. Because any material or information we disseminate publicly, can now have worldwide repercussions in this current global information age-- that can result in mass violence and chaos. Freedom of speech is one thing, abuse of individual rights is another. Intentions are secondary to this issue, because even if the intention was innocent at the inception, the resulting misinterpretation can be fatal. Is "sorry" enough for lives lost? If we are adamant about our rights to free speech (and expression), then we should also have the decency to use it responsibly.

Actor/Filmmaker/Broadcaster Orson Welles doing "The War Of The Worlds"
Something similar (but in a much smaller scale) happened in 1938, when Orson Welles dramatized H.G.Well's novel,"The War of the Worlds." Some listeners only heard a portion of the broadcast and mistook the radio play for a real full-scale invasion of Earth by Martians. It may sound silly in hindsight, but with the tension of World War II looming, panic ensued-- with people across the Northeastern United States and Canada fleeing their homes. That was just the radio, now we have TV, cable TV, the internet with its social networks and mobile device access in the hands of billions of people around the world. Social responsibility and culpability regarding public media must become the social and cultural norm (a part of our generally accepted etiquette and manners). 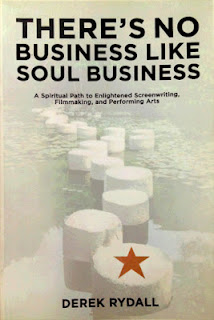 "There's No Business Like Soul Business" is a great guide on how to  become a responsible media creator. Written by actor, screenwriter, author and licensed spiritual therapist Derek Rydall, the book argues for an enlightened approach to storytelling and media production in general. It traces the sacred origins of entertainment as a tool for transformation, and its degeneration to its present form as popular entertainment without "soul" (redeeming spiritual, mental and emotional content). It argues that entertainment and enlightenment can co-exist, and should be the main "raison d'etre" for media creation.
Here is an excerpt from the book:
Why do we dream in stories? Why do therapists encourage us to tell our stories?... Why is the entertainment industry one of the biggest and fastest growing industries on the planet? I believe it's because story is the mechanism by which we live, express, understand and evolve. Story is more than just equipment for living-- it's life itself... Stories are the manner by which we extract meaning out of the fibrous pulp of our everyday lives. And meaning is the spiritual oxygen that allows our soul to breathe. Without stories, life has no meaning. Without meaning, we cannot live.
--Riot photo by Kostas Tsironis, AP. Quote from "There's No Business Like Soul Business by Derek Rydall
Posted by Atom at 1:44 AM