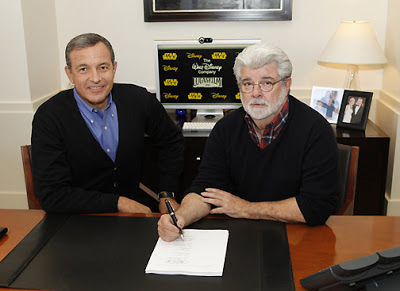 
Trick or treat, smell my feet, give me something good to eat!
Like a giant Black Hole, Disney just swallowed another big star in the media universe.  This time it's none other than the empire simply known as Lucasfilm, Ltd.-- The home of the "Star Wars" and the "Indiana Jones" franchise.  Like Pixar Animation Studios (which Lucas also originally created), Marvel Entertainment, Muppets Studio (by Jim Henson), ESPN Inc., ABC Television, A&E Networks and for a short time, Miramax Films, Lucasfilm, Ltd. follows the fate of a dozen other highly successful media companies that eventually became a part of the Magic Kingdom. 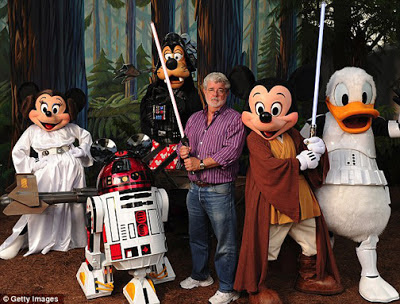 The Star Wars and the Disney franchise blend into one
According to George Lucas, creator of the franchises and sole owner of Lucasfilm, Ltd., "I'm doing this so that the films will have a longer life... I get to be a fan now... It's a lot more fun actually, than having to go out into the mud and snow."  The "Star Wars" and the "Indiana Jones" franchises have taken a life of their own, with a global fan base of billions of fans; George is just tired of being at the helm, a position that makes him the primary target of biased fan critism and ridicule.  Recently, he has become the object of derision when he release the 3-D versions of the 6 "Star Wars" films. For years, die-hard fans have branded George of being a commecial sell-out and for ruining his original creation-- the first three "Star Wars" movies.  George sums it up simply, "Why would I make any more (movies) when everybody yells at you all the time and says what a terrible person you are?" 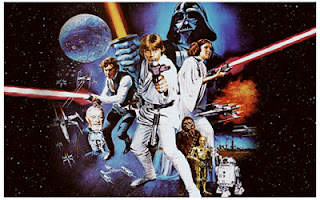 After the vicious reception of his prequels, George vowed never to do any more "Star Wars" films and he is holding on to that promise.  But now that the franchise is owned by Disney, a new trilogy is planned, starting with "Episode 7" continuing the story of Luke, Han Solo and Princess Leia beyond "Return of the Jedi."  After that, Disney plans to release a new "Star Wars" movie every two or three years.  George will remain as a key advisor to the upcoming projects, but they will be headed by mega-producer Kathleen Kennedy, current co-chairman of Lucasfilm and the upcoming division president under Walt Disney Studios.
Disney is purchasing Lucasfilm, Ltd. for $4.05 billion, paying half in cash and half in newly issued stock.  George will end up owning 40 million Disney shares, 2.2 percent of the total when the transaction is completed.  The deal includes Lucasfilm, Ltd., its franchises and its divisions-- Industrial Light & Magic (ILM) and Skywalker Sound.
George had a wild ride for more than three decades, which started when the first "Star Wars" movie became a mega-hit.  He wished upon a star (wars) and his wishes came true... in fact, beyond his wildest dreams.  It's time for him to hang his laser pistol belt and his light saber and enjoy a much deserved retirement.  Now it will be up to Disney to regale us with the continuation of George dream.  Will Disney turn out to be allied to the "Force" or in league with the "Darkside," only time will tell...
Here is a video about the deal:


--pictures and video courtesy of Lucasfilm, Ltd. and Walt Disney Studios.
Posted by Atom at 8:22 PM