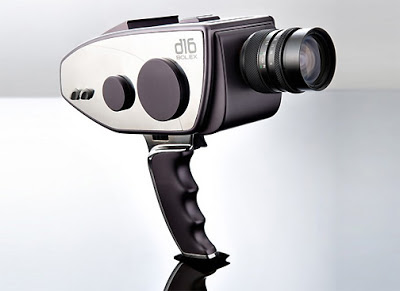 It's just appropriate that my first blog for 2013 will be about the new Bolex D16.  Long awaited by die-hard Bolex fans, this camera had a long laborious journey towards its realization.


I am one of those devotees aching to get my hands on one.
I bought my first Bolex 20 years ago to shoot my student films at Art Center College.  I had a choice between an Arriflex S and the Bolex SBM.  The Bolex won hands-down, because of its built-in manual-wind internal motor and its more stylish "retro" body.  I just could not get myself to like the "blowfish" like body of the Arriflex S.  At the dawn of the digital transition when I purchased the Canon XL-1s, I traded my SBM for an older all manual 1930s H16 with a turret mount -- which I thought was even better looking than the SBM.  I just had to have a Bolex, even if I got to use it rarely (just to create texture in my now mostly digital films).  I was really devastated last year when Kodak annouced its bankruptcy, which meant that my precious Bolex's days are numbered.  Well... until I found out about the new Bolex D16! 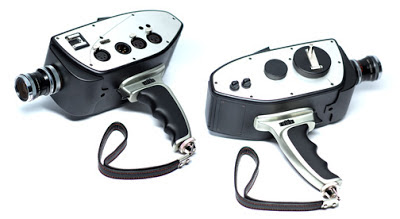 Proto-type body of the Bolex D16
The dream of creating a digital Bolex came from two Los Angeles based filmmakers, Joe Rubinstein and Elle Schneider.  After securing the blessing of Bolex, SA, they lauched a Kickstarter campaign that raised $100,000 in 24 hours.  After extensive field tests, tweaking, modifications and launch delays, the camera proto-type you see above is the finalize camera body, except for a few minor details in color.  The MSRP will be around US $3,000. 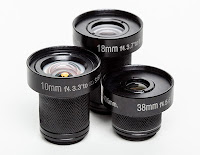 The D16 lenses are fixed focus, fixed aperture lenses.  An optional Universal Follow Focus mechanism is being developed built-in to the lens mount to reduce per lens cost (to around $300) and to simplify the design.  The first lens line up include a wide-angle lens 10mm f/4.3 (S35=21mm), a normal lens 18mm f/4.3 (S35m=36mm) and a telephoto lens 38mm f/4.5 (S35mm=80mm).  Their focusing ranges without the follow focus mechanism are as follows: 10mm - 1m to infinity, 18mm - 1.12m to 1.98m, 38mm - 1.7m to 1.98m.  Three extra f/8 lenses are also being developed and tested, as well as a classic Bolex style turret mount that can hold three lenses at the same time.
The camera's skeletal structure and panels are made from carbonized aluminum, with weather sealing to anticipate the harshes climates the camera would be working in.  The digital display is prominently placed on the top next to the control panel.  The D16 has two tripod screw holes for professional tripod plates and rigs, plus a third one under the pistol grip (w/o the strap).  It also has a removable post to hang a measuring tape on for measuring focus and a trap door in the bottom as a provision for an attachable HD-SDI Module in the near future.  These are features that can only be found in professional grade cameras that cost 4 to 20 times as much.
The Bolex D16 is a big camera in a little package.  The specs. are just right for the documentary or indie filmmaker.  It is a true successor to the Bolexes of yesteryears.  The only minor complain I have personally is the body shape, which to me is more reminiscent of the 16mm Beaulieu cameras from France (which I also happen to like, anyway).  But despite that minor detail, I can't wait for the first batch to be shipped so I can get in line to buy one.  Of course, my D16 will have an EF mount!
For more information on the Bolex D16, go to www.digitalbolex.com
-- Images taken from www.digitalbolex.com
Posted by Atom at 10:44 PM