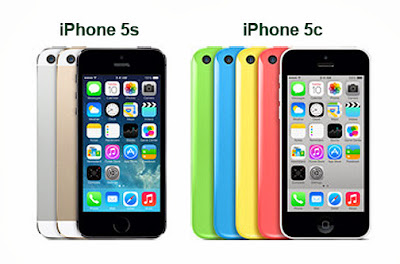 It's September 20 and the new iPhones are finally available today worldwide.  The two newest incarnations of Steve Job's mobile tech legacy were announced two weeks ago, to mixed reactions.  I am a fan who is less than enthusiastic about the current line-up.
An avid loyalist from the first iphone, I stopped upgrading after the 5th version-- the iPhone 4s.  Aside from the obvious cellphone function, I use my iPhones mainly as a camera backup for shooting candid photographs, and it frustrates me that Apple has not really upgraded its mobile camera technology for the last two generations.  Stuck at 8 megapixels for the last 2 years, despite slight improvements in low-light capabilities, I have had no real reason to upgrade my phone.  If I needed to shoot in extreme low-light, I have a Leica, several Canons and Mamiyas, and even a Go Pro 3 to choose from; so an increase in resolution would have been a great selling-point to me and other iPhone photographers.  Besides, the iPhone is now seriously lagging behind its competitors, who have been offering better cameras in their cellphones for years.
I have used the iPhone as a serious photographic tool for years, to the extent of having an exhibit of limited edition prints from my iPhone generated images.  It continues to be a great tool for visual artists like me, mainly because of its versatility and wonderful Apps.  But the resolution of its camera limits my print sizes to 8 x 10 inches.  Apple, please take note of this plea or I might be forced to switch to another brand, just to satisfy my technical needs.  I am already using a Samsung as a second phone to my now outdated 4s, trying to see if its technology is actually better. 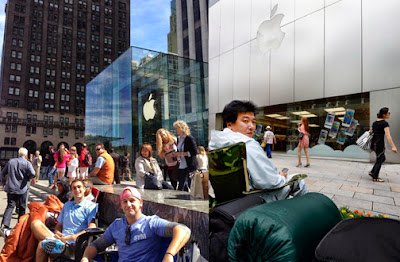 Iphone fans line up from New York to Tokyo to get their fix.
This year, Apple released two versions of the iPhone to address a segmented market:  The iPhone 5s-- the logical descendant of the previous models; and the iPhone 5c-- to cater to a more budget conscious consumer.  The company made sure that there are slight differences between the two models to justify the 5s' steeper price.
Like the older models, the 5s is armored in an aluminum/plastic shell, while the 5c is encased in an obviously cheaper all-plastic body.  You can finally get the iPhone in a variety of colors:  the 5s in Silver, Gold and Gray trim; the 5c in pastel pink, green, blue, yellow and white.  The 5s has a 64-bit A7 chip and an extra M7 motion coprocessor; the 5c retains the iPhone 5 A6 chip.  The camera specs. of the 5s is essentially the same from the iPhone 5, with a larger sensor (8 megapixels with 1.5µ pixels); while the 5c retains the iPhone 4s camera specs.  The premium 5s model also has a 'True Tone flash', auto-image stabilization, burst mode and slow-motion video capabilities.  Both models feature a 4-inch Retina display.  But the 5s also has Apple's newly developed Touch ID fingerprint identity sensor installed on the main button for added security.

I personally believe that Apple has faltered in its last two iPhone offerings, by delivering models that have no real significant advancement in technology or universal consumer appeal.  A lot of former loyal customers are beginning to question the iPhone's viability in the near future.  If Apple cannot come up with new technological features (that are practical), they can at least continually increase the camera and storage memory capacities of their subsequent models in gradual increments.  Maximum memory capacity has been pegged at a low 64 GB for the last 3 years.  I also use my iPhone as my iPod, gaming device and handy camera; the hard drive capacity of the iPhone should have been increased a long time ago to at least 120 GB or 160 GB.
After using a Samsung, I still prefer my old iPhone 4s interface.  It is more intuitive and easier to use.  Apple has to consistently deliver superior products to stay ahead of the curve.  If they at least redesigned the iPhone's form-- not just its length, that might be a significant enough to entice me. Although colors do have an appeal to most visual artists, silver and gold or even worse, half-baked pastel hues that are totally devoid of personality or conviction, are not compelling enough arguements for an upgrade.

From my perspective, I am beginning to see a downward trend to the quality and the vision for the iPhone.  Instead of being a leader, it has chosen to compromise itself to the market-- rehashing old tired technology from its past, and passing it off as revolutionary; playing it safe by strategically placing itself in an undefined middle-ground, alienating its core target market and compromising its vision to increase profitability.  Steve, where are you?  Apple desperately needs you back!

--Product images from Apple.com
Posted by Atom at 2:22 AM