Anne and I found ourselves on a flight to Malaysia, just several hours after DAGSIN's last commercial screening. We were on a plane to attend the ASEAN International Film Festival and Awards (AIFFA) in Kuching, Malaysia for the 2nd time after 2017, when DAGSIN was among the "official" films selected to compete. 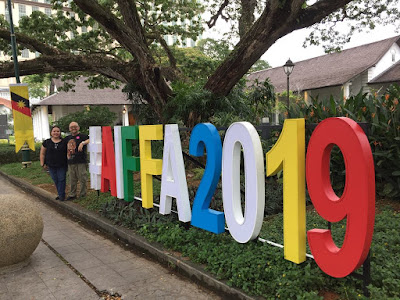 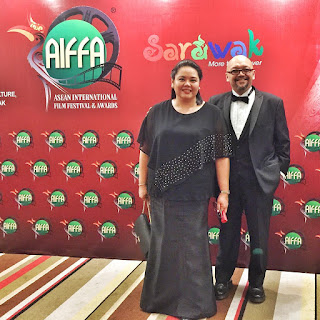 This time around, Anne and I had been invited to give a "talk" (about our experiences in producing DAGSIN, our two year journey though the festival circuit, and finally releasing the movie commercially, just a week prior) in AIFFA BIZ, the professional media industry portion of the festival.

The Philippine Delegation this time around was smaller, despite the increase in the number of Filipino Films officially competing. We flew in with the Filipino contingent, but since we were booked in a separate hotel with the other ASEAN AIFFA BIZ participants, Anne and I still found ways to hang-out with our compatriots.

Our Talk was scheduled on the second day. After listening to the other "Talks" by various Media Professionals invited from all over the ASEAN, Anne and I began feel that maybe we were invited by mistake. Most, if not all, of the other Presenters are Commercial Production Houses and veterans of the industry, not only from Asia but also from Hollywood. So when the audience approached us one by one after our presentation, congratulating us both for DAGSIN and exclaiming how we inspired them to keep on making movies, Anne and I were both surprised and elated!

The AIFFA awards night is a formal sit-down dinner affair that is televised nationwide in Malaysia and several other ASEAN countries. The Philippine Delegation came home with the most awards, including Best Film for Chito Roño's "Signal Rock and a post humous Best Actor trophy for Kristoffer King for his performance in Howard Yambao's "Kristo."

Anne and I were scheduled to leave on April 28 so that I can celebrate my birthday in Manila, but  our good friend Adelina surprised us by extending our stay for an extra day and offered us our own driver and car so we can tour Sarawak. We had been to Kuching before, but we did not have any time to go around. Anne and I were just so grateful to be finally given the chance to see some of Sarawak.

As we were having breakfast in our hotel dinning-room in the morning of my birthday, the hotel staff surprised us with a birthday dessert. Adelina Iskandar, AIFFA BIZ head, who was directly responsible for our participation in AIFFA 2019 and our extra tour day, was also behind this special birthday treat for me. Thank you, thank you so so much Adelina! I hope one day we can return the favour and treat you and Fish to a wonderful holiday in the Philippines.

-- All photos are the exclusive property of Atom & Anne Mediaworks, Corp.
Posted by Atom at 12:12 AM