Earlier today, Mamiya (USA) introduced four new Digital Backs: the DM22 (22megapixels), the DM28 (28megapixels), the DM33 (33megapixels) and the DM56 (56megapixels).  Earlier this week, the company also introduced four new cameras with basically the same model numbers -- the reason for this is because the body is essentially the same model for all the cameras, the new Mamiya 645DF (or Phase One 645DF), the only difference between each camera model is their Digital Backs.

Manufactured by Leaf and designed by Mamiya with the help of Phase One, the new Digital Backs feature 22, 28, 33 and  56 megapixel sensors coupled with a 16 bit/channel color palette, which promises to deliver exceptional color accuracy and high dynamic range (12 f-stops).  It processes its RAW images as Leaf Mosaic HDR-type and is fully compatible with Capture One and Leaf Capture (both included in the package) or Adobe Lightroom and Adobe Photoshop.  The ISO range varies for each model -- from 25-400 for the DM22, 50-800 for the DM28 and DM33, to 80-800 for the DM56.  All four models have 6 x 7 cm touchscreen LCDs.  The Digital Backs are also fully compatible with the Mamiya 645 series, as well as the RZ67 and the RB67 systems through special adapters. 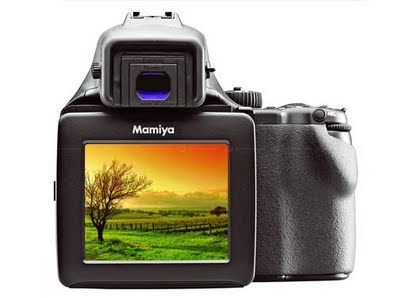 The cameras bodies are manufactured by Mamiya, but was developed in partnership with Phase One.  The new "645DF" camera-core technology offers two user-selectable shutter systems -- leaf or focal plane.  Three newly designed Schneider-Kreuznach lenses (55mm, 80mm, 110mm) give the camera a leaf-shutter option over its internal focal-plane shutter system.  The new Mamiya DM Series camera packages are sold as a "complete camera" with an 80mm f/2.8 D Series Lens.

Phase One and Mamiya Digital Imaging's "strategic alliance," which includes technology-sharing as well as sales and marketing cooperation, has led to the development of this open platform-based medium format modular camera system that was designed in partnership with Leaf and Schneider-Kreuznach.  Phase One is a major share holder of Mamiya Digital Imaging and has been the driving force in the development of the brand's flagship 645 camera system.  Phase One has also purchased key assets of the Leaf brand and has formed a new company called Leaf Imaging, Ltd.   As a result, this camera system is currently being marketed by three brands -- Mamiya: camera body and digital backs as the DM Series; Phase One: camera body as the Phase One 645DF (open platform back mount or using its own Backs); Leaf: digital backs as Leaf Aptus II Series 5, 6, 7 and 10. 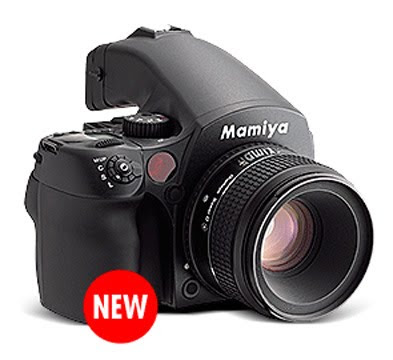 I think that Mamiya has finally gotten their act together, boosted by their partnership with Phase One.  When photography shifted to digital, I feared that Mamiya would eventually be one of the casualties.  Hasselblad's early success in the medium format digital arena, left Mamiya in the dust.  But in an ironic twist of fate, it was also Hasselblad's decision to fully integrate their production (with their acquisition of Imacon) that gave Mamiya the ability to eventually remain competitive, since Phase One was left with no other alternatives (Leaf initially partnered with Sinar).  Phase One has not only remained viable, but it has come out of the other side stronger and bigger -- ready to take on Hasselblad.

The new Mamiya/Phase One/Leaf camera and backs with newly designed leaf-shutter Schneider-Kreuznach lenses, promises superior performance as well as affordability.  The DM22 camera set is priced at $9995 -- a very low price tag for a medium format DSLR.  Although still priced slightly higher than the comparable Canon 1Ds Mark III or the Nikon D3x (the Mamiya comes with a lens), the larger medium format sensors have a clear advantage in terms of image clarity and color rendition at extreme magnifications or at extreme enlargements -- generally required in some commercial applications.  None the less, this new price level could indicate a trend that all of us gladly welcome.

Excellent coverage here. Shall pass on the word to Zevix my friend who is a Mamiya fan..