Michelangelo Antonioni’s “Blowup” is a cinematic masterpiece that has withstood the test of time. It is as relevant now as it was in 1966. It has inspired and influenced countless filmmakers, as well as sparked heated debates among movie aficionados. It is a very potent work of art that either agitates or aggravates its viewers into spontaneous applause or inordinate disdain. 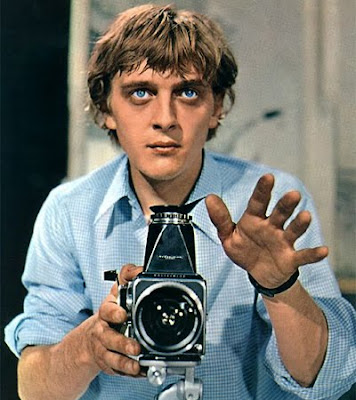 I just purchased my copy of the film yesterday, after seeing it on cable the other week. I have seen the film more than a dozen times before and my feelings had been mixed. But seeing it again after so many years made it fresh, and this time around I was applauding.

I remember attending a special screening of “Blowup” with my wife Anne eight years ago, in the Los Angeles County Museum of Art. While we were visiting the museum, I saw an announcement of the screening. I literally pushed Anne into the auditorium, eager to finally see the movie on the ‘big screen.’ We were newly married then and I really did not know how she will react to the film’s ending. 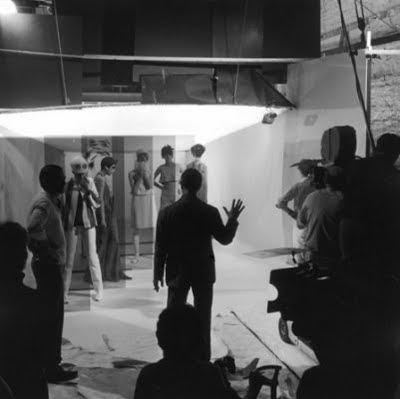 I was still a teenager the first time I saw “Blowup,” and I thought it was an absolute work of genius. The second time I saw it, I was in college and I thought it was clever. The third to the nth time I saw the movie, I was in film school and my feelings toward it vacillated from admiration to revulsion. By the time I was seated next to my wife in the LACMA Theater, I was somewhat indifferent. Pathetic as it may sound, I was basically watching it again to relish the ‘photography sequences’ (I was not yet a career photographer then) – It is, after all, the quintessential “photographer film.” 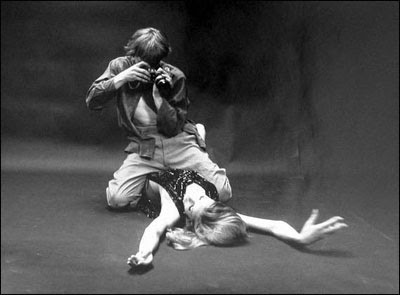 As the crowd stood up from their seats to give the film a standing ovation, Anne looked at me quizzically with the most amusing “what the F___” expression I will never forget. She hated the film! She understood what Antonioni was trying to do, but she hated the movie for manipulating her – taking her for a ride. Anne believes that the film is too artificial, too contrived even to be considered clever.

After working for a few years as a commercial photographer I believe that I can finally (fully) appreciate what Antonioni was probably trying to do, because commercial photography in itself is a “contrived art” as much as narrative filmmaking is. What is more subjective than our own personal vision? By using a fashion photographer (modeled after real fashion photographer David Bailey) as the protagonist, Antonioni magnifies the subjectivity of the character’s reality a hundred fold – what seems to be reality to Thomas is actually just visible to him (or to us). Photography captures (objective) physical reality more accurately than any other medium, but because it isolates that reality and captures it from an “absolute” perspective, (even in its most purest form) it is and always will be a “subjective art.” In the field of Photography, Fashion Photography is the most subjective by virtue of both technique and subject matter.

With “Blowup,” I believe that Antonioni had successfully materialized a thesis on “subjective reality” using (or manipulating) classic narrative elements, character, drama and metaphor. The film is a genuine ‘abstract’ work of art in both form and substance, that it is even open to individual (subjective) interpretation up to now. "Blowup" is a rare gem and should be regarded as one of the greatest films ever made. Unfortunately, in getting to the point, the movie manipulates our sense of reality, which leaves most of us (the audience) disoriented and ungratified (since there is no closure in the usual sense). Well, nothing is perfect.

Here are two of my favorite photography sequences in the movie:


Thomas obsessing over his negatives, which he blows-up and blows-up some more... until he sees something that might not be there.


--Movie stills from "Blowup" by Michelangelo Antonioni.  Movie clips from http://www.youtube.com/.
Posted by Atom at 7:44 PM