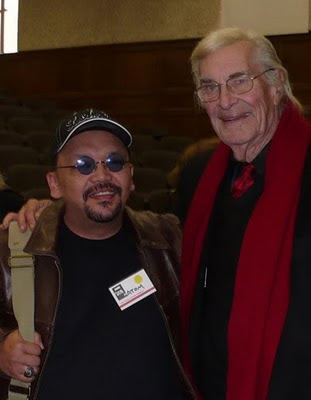 Actor Martin Landau and me
Last November 14 and 15, I had the priviledge of attending "The Total Picture Seminar"-- A seminar I still regard as one of the best seminars in filmmaking I have ever attended.  Hosted by multi-awarded Hollywood veterans: Martin Landau, Mark Rydell and Lyle Kessler, the seminar delivered exactly what it advertises, "a total picture" or rather an in-depth look into the process of filmmaking.

I waited for a while to blog about it, because I was hoping to coincide my entry with a new seminar date.  But for one reason or another, this has not happened.  I am hoping that they will still be able produce this seminar once more, because I strongly believe that a lot of new filmmakers, actors and writers out there (specially the Independents) would greatly benefit from the extensive work and experience these three esteemed industry veterans are willing to share.

Up to this date, this seminar has truly been a "once in a life-time special event" for all the filmmakers, directors, actors and writers who were lucky enough to attend.  Martin, Mark and Lyle not only shared their techniques in acting, directing and writing respectively, but also rare insights into the collaborative process between these disciplines as well as entertaining stories and anecdotes about their major works.  The attendees were also given a chance to participate in several hands-on workshops doing actual "scene work" supervised by the three.

I was so moved by what I learned and experienced that I have nothing but praise for the generosity of these three gentlemen as well as for the producers of this event. I told Mark and Martin after the seminar that I thought that I already knew how to direct, but after listening and seeing them in action, I now just refer to myself as a filmmaker.  They made me want to be a DIRECTOR!  After experiencing these three masters of cinema -- the current deans of the Actors Studio (West), I finally understood the importance of knowing what "acting" is (by being an Actor yourself) or at least deeply understanding the elements involved in "acting," in order to be an exceptional Director.

Here are clips on each of them explaining the seminar and their respective crafts:

--Video Clips from YouTube.com by The Total Picture.
Posted by Atom at 9:09 AM