Christmas in June ???? For Mamiya RZ photographers, it certainly is! Mamiya just announced a dedicated digital back for Mamiya RZs in a kit called "RZ33" (bundled with a RZ ProIID body). 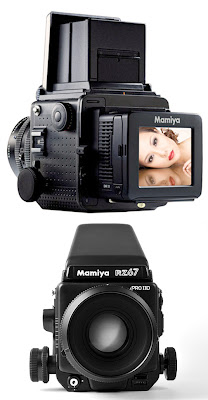 The RZ33 kit includes a Mamiya RZ ProIID camera body with 33mp focusing screen, Mamiya cable-free Digital Integration Plate, Mamiya DM33 digital back & battery, battery charger, FW800 cable (for tethered shooting) and software.  The RZ ProIID body (which has been around for several years) of course features Mamiya's advance microprocessor technology through it's cableless MSC (Mamiya Serial Communication) system.  The Mamiya DM33 digital back (which I featured last October in this blog) manufactured by Leaf/Phase One/Mamiya features a 33 megapixel 48 x 36mm CCD 16 bits/channel sensor with a burst rate of 1.1 sec/frame and a 12 f-stop dynamic range.  It has a user selectable ISO range of 50-800 and a 6 x 7 cm touch screen LCD.  The ProIID body communicates with the digital back wirelessly through the special Mamiya RZ cable-free Digital Integration Plate which features RZ's unique revolving back, which provides horizontal or vertical composition without moving the camera body sideways. 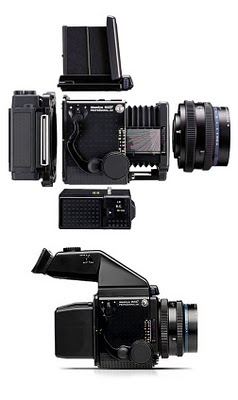 The Mamiya RZ is one of the most modular SLR camera systems around and has been used as a workhorse in Commercial and Fashion Photography.  The new RZ33 kit represents Mamiya's continuing commitment to the Professional.  It seamlessly integrates the old with the new -- giving loyal users the ability to switch effortlessly between film and digital at a minimum cost.  Commercial and Editorial photography has steadily become an equipment driven industry ever since the switch to digital -- equipment costs at the highest level of photography can easily cripple a photographer's ability to survive commercially.  I for one love this latest development in Mamiya, because I hate discarding perfectly useable equipment due to technical obsolescence or trade-in pristine film gear in order to afford a newer digital model.  I am glad I kept my own RZ gear because it is such a good camera -- I love the size and heft of the camera, as well as the rack and pinion bellows focusing. I eagerly await the much bigger sensors (at least 6 x7) that might eventually develop to take full advantage of the RZ's natural format. For now, the DM33 (and the DM56) with its RZ interface, will be a much welcome edition to my arsenal.
Here is a video of the Mamiya RZ33 kit from Mamiya:

--Pictures from Mamiya. Video from YouTube.com by mamiyavids.
Posted by Atom at 12:51 AM