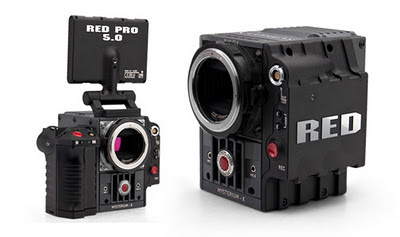 When I found out about this... I couldn't wait to blog about it too!
RED Digital Cinema has finally unveiled its long promised "ultimate camera," the RED Scarlet X, immediately after Canon annouced its new EOS C300.  The Scarlet has been hinted about for more than 3 years, but has not been formally launched until a few days ago.  In the wake of Canon's reveal, RED immediately responded with the Scarlet X to douse the excitement building around the EOS C300 -- The Scarlet X will be retailing at half the price (9K + to the C300's 20K) and will be available by December (the C300 will be available Jan. 2012).  These are exciting times indeed!
I call the Scarlet X the ultimate camera, because it can be used for both professional still photography and cinematic videography -- like the new generation DSLRs, but for high-resolution (4K) pro-cinema grade applications.  The other professional grade digital cinema cameras currently in the market (including the new C300) are all dedicated motion picture cameras.

The RED Scarlet X looks really good on paper, capturing 5K stills (Redcode RAW) up to 12 fps and 4K motion resolution to 30fps.  The camera is modular and is adaptable to any shooting scenario, be it still or motion, and can be fitted with an array of gadgets and accessories including multiple lens mounts (the camera comes standard with either a Canon EF or PL mounts). 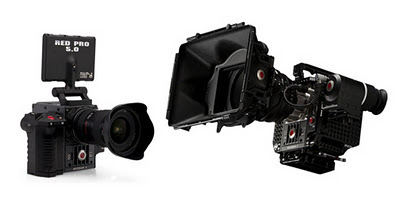 The RED Scarlet X configures both as a still or motion picture camera
The RED Scarlet X boast a dynamic range of 18 stops, 4 more stops of latitude than 35mm film and 6 stops more than the new Canon EOS C300 using HDRx.  It also captures two simultaneos streams using unique shutters -- one for motion, one for stills (VFX tracking).  This camera shoots at 4096 × 2160, at up to 25FPS, or quad HD at 30, at compression rates superior to what they’ve been shooting digital movies on for years.  This data rate is eight times what Canon’s new C300 system shoots at -- 50 megabytes per second, or 400mbit/s.  It will also shoot 3K at 48fps, 2K at 60fps, and 1K at 120fps.
Here are some of RED Scarlet X's specs in a nutshell:


Here is some footage shot with the new RED Scarlet X at 120fps:


--Photos and Video by RED Camera www.red.com
Posted by Atom at 9:19 PM