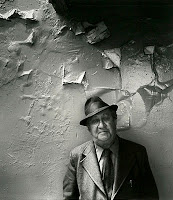 Aaron Siskind was a photographer with a Graphic Artist's "Eye."  Best known for his Abstract Expressionist photographs, he was associated with the Abstract Expressionist School of New York (art movement) in the 1940s and 50s -- which included close friends Franz Kline, Barrett Newman, Adolph Gottlieb, and Mark Rothko.
He worked as a high-school english teacher, before receiving his first camera as a honeymoon gift -- igniting a life-long passion for Photography .  He started his photographic career as a documentarian in the New York Photo League, creating photo-essays of political importance including Harlem Document, Dead End: The Bowery, Portrait of a Tenement, and St. Joseph's House: The Catholic Worker Movement. In the early 1940s, his work shifted to the abstract and metaphoric.  During a trip to Martha's Vineyard, Siskind began approaching still objects from a very intimate range, framing them up-close so as to underscore the formal qualities of their lines, colors, and textures. This newer, more abstracted work was well received, and he was invited to show his work at the Charles Egan Gallery, in the company of many Abstract Expressionist painters. 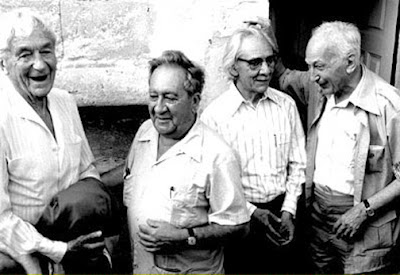 With Jacques-Henri Lartigue, Manuel Alvarez Bravo and Andre Kertesz
Siskind joined fellow photographer and friend Harry Callahan in the Institute of Design in Chicago, where he became the Head of the Photography Program when Callahan left.  He help found the Society for Photographic Education in 1963, then reunited with Callahan at the Rhode Island School of Design, where he continued to teach until his retirement in 1976.
Aaron Siskind's Abstract Expressionist Photographs (particularly his "The Road" series) have influenced me greatly.  As a whole, I believe they represented the next logical shift of Photography as a fine art during the analog era.  Deliberately obscuring his subject matter by simply concentrating on form, texture and simple visual elements, Siskind was able to push photography into the realm of abstraction-- Simple and direct, without employing elaborate tricks and gadgets.  In this era of digital excess, we can learn a lot from this photographic master and genius.  All you really need is your imagination and vision (your innate ability to "See") to create stunning works of Art.

Here are some examples of his work: 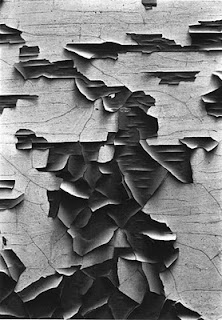 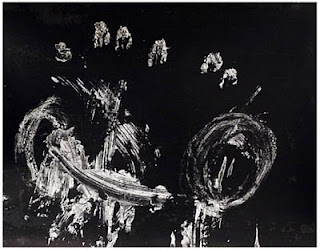 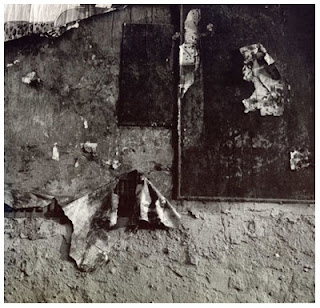 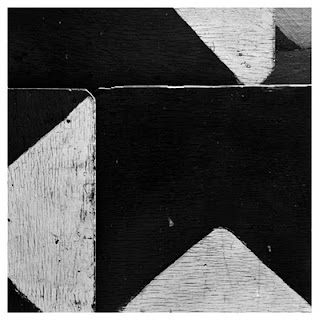 My favorite series are "the Terrors and Pleasures of Levitation," shot around 1956... 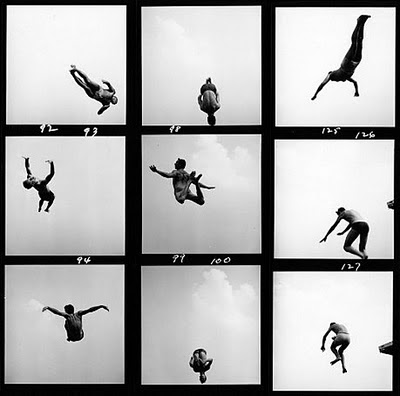 ... and his last untitled series (commonly referred to as "the Road). 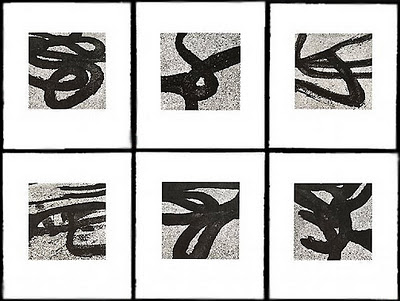 My new series "Grounded," which will be on exhibit this December 4th (Aaron Siskind's birthday) to January 6th 2012 at the Filipinas Heritage Library, is an homage to Aaron Siskin's last series.

-- All photos property of the Aaron Siskind Foundation.
Posted by Atom at 1:00 AM

The group picture shows Jacques-Henri Lartigue (Not Clergue) on the left. I suppose it was taken in Arles.

Thank you so much for noticing. I will apply the correction.