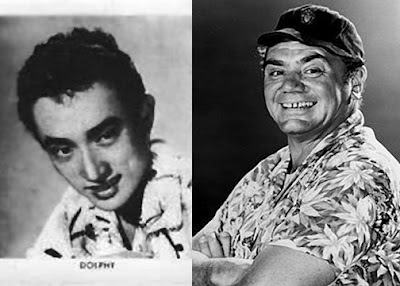 Philippine Comic Dolphy and American Actor Ernest Borgnine
Two favorite actors from my youth passed away last week.  Filipino Actor/Comedian, Dolphy died on July 10 in Manila at the age of 83; and American Actor, Ernest Borgnine died on July 8 in Los Angeles at the age of 95.  Both had long and illustrious careers (in their respective countries) in cinema, television and the stage.  I will forever treasure the wonderful characters they artfully portrayed on television and on film as wonderful memories of my childhood-- particularly John Puruntong (Dolphy) and Quinton McHale (Borgnine), as well as the infinite roles they starred in like: Facundo Alitaftaf (Dolphy), Kapten Batuten (Dolphy), Captain Barbell (Dolphy), El Pinoy Matador (Dolphy), Tansan (Dolphy), Detective Mike Rogo (Borgnine), John Corbis (Borgnine), Sheriff Lyle Wallace (Borgnine), Harry Booth (Borgnine) and the Roman Centurion in Jesus of Nazareth (Borgnine).
Rodolfo Vera Quizon or Dolphy (as he is more popularly known) started his career performing live on stage during the Japanese Occupation (World War 2).  Dubbed the "King of Comedy" in the Philippines, Dolphy has been featured in more than 200+ films since 1946.  He was also a popular TV personality with runaway hits like "Tang-Tarantang," "John En Marsha", "Idol Si Pidol", "Home Along Da Riles" and "Pidols Wonderland."  Rodolfo Quizon has been conferred multiple life-time achievement awards and has won acting awards from all the media award-giving organization in the Philippines-- The Gawad Urian, the FAMAS, the Metro-Manila Film Festival, the PMPC, the Cinemanila-- and is currently being considered for the Country's highest artistic recognition, the Order of National Artist of the Philippines.  But his most important legacy to his fans is the gift of laughter and entertainment he provided to millions of Filipinos all over the world, and the memories we all have of a generous and fun loving soul.
Like Dolphy, Ernest Borgnine started his career on the stage, which eventually led to a career in cinema and television.  Ernest's  filmography and television success was as extensive, with 150+ film appearances and a host of TV hits like "McHale's Navy", "Airwolf", "the Dirty Dozen" and "Spongebob Square Pants (voice)."  He won an Oscar, a Golden Globe and a BAFTA for the movie "Marty"; the Life-time achievement award from the Screen Actors guild and had been constantly nominated for the Emmys.  Ernest Borgnine was also honored by the City of Hollywood for his achievements in the Motion Picture Industry with a "star" with his name on it on the "Hollywood Walk of Fame," among the other famous Stars on Hollywood Blvd.
Posted by Atom at 9:09 PM