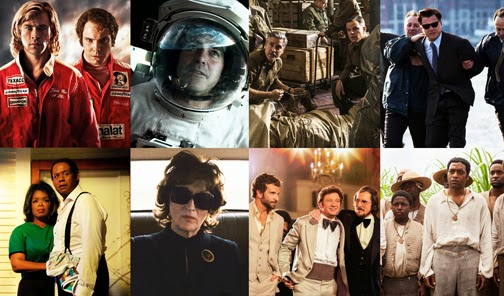 I have to apologize for my sporadic blogs these days, I have been uncharacteristically busy these last couple of months, that I actually had to work through the Holidays (during a family trip abroad). But we all have to make a living somehow, right? Anyway, I actually had a few hours of free time this Saturday morning, and I thought that it would be a great time to catch up on my Blogging.
What better subject to start 2014 than the Oscars right? I know more than a few people out there who hate this iconic Hollywood tradition with a passion.  But even the Academy's most stauch critics cannot deny that it is a global phenomena and that it is still the most anticipated award event for Cinema in the whole world.
As a filmmaker, I still celebrate the Oscars and look forward to the ceremony as an annual global tradition to celebrate the filmmaking skills at the most biggest and most financially successful "dream factory" in the world (at least in this era)-- Hollywood.  Like a forbbiden fruit, Hollywood still beckons  to filmmakers from all over the world, as the ultimate arena where they can test their skills against the world's best.  Hey, the Oscars is actually the oldest "Reality" program on TV.
So let the battle... I mean contest begin!
Here are my personal picks for 2014:
BEST PICTURE
American Hustle
Captain Phillips
Dallas Buyers club
Gravity - winner
Her
Nebraska
Philomena
12 Years a Slave
The Wolf of Wall Street
DIRECTING
David O. Russell
Alfonso Cuarón - winner
Alexander Payne
Steve McQueen
Martin Scorsese


BEST ACTOR
Christain Bale
Bruce Dern
Leonardo Di Caprio - winner
Chiwetel Ejiofor
Matthew McConaughay
BEST ACTRESS
Amy Adams
Kate Blanchett
Sandra Bullock - winner
Judi Dench
Meryl Streep
BEST SUPPORTING ACTOR
Barkhad Abdi
Bradley Cooper
Micheal Fassbender
Jonah Hill - winner
Jared Leto
BEST SUPPORTING ACTRESS
Sally Hawkins
Jennifer Lawrence - winner
Lupita Nyong'o
Julia Roberts
June Squibb
CINEMATOGRAPHY
Philippe Le Sourd
Emmanuel Lubezki - winner
Bruno Delbonnel
Phedon Papamichael
Roger A. Deakins
ANIMATED FEATURE
The Croods
Despicable Me 2
Ernest & Celestine
Frozen - winner
The Wind Rises
These are my picks for the winners in the top categories: Gravity is a shoo-in for best picture; For best director, Alfonso Cuarón should win for the sheer technical brilliance of Gravity; For best actor, Leonardo Di Caprio should win because of his brilliant/over the top performance, and since he has been snubbed by the Academy for so long, but they might give it to Matthew or Christian; For best actress, Sandra Bullock is a shoo-in, but Meryl Streep should get the Oscar; For supporting actor, Jonah Hill was so entertaining, but they might give it to Bradley or Jared, with Barkhad as a dark horse; For supporting actress, Jennifer or Julia, with Lubpita as a possible surprise; For cinematography it should be Emmanuel Lubezki for the sheer technical brilliance of Gravity; Do we even have to discuss Frozen?
There you go, my predictions for this year's Oscar race. Let's see how I fare:)
Posted by Atom at 8:33 PM