Last Sunday, my daughter was the Guest of Honor at the Portuguese Bend National Horse Show, held at the Rolling Hills Estates in the Palos Verdes Peninsula. She awarded the Gabriel C. Duque, Jr. memorial trophy with Childrens Hospital LA Head of Radiology, Dr. Marvin Nelson.

Seeing her award that trophy brought tears to my eyes... 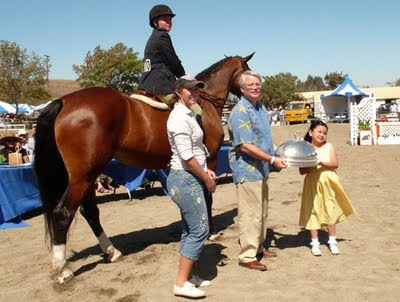 The annual Horse Show is sponsored by the Peninsula (Palos Verdes) Committee Childrens Hospital, a non-profit organization dedicated to raising funds for Childrens Hospital Los Angeles. Founded in 1957, it has grown to more than 170 South Bay families who volunteer all year long for the common goal of giving more to the children of Los Angeles.

We would like to thank the members of the PCCH for their gracious hospitality... Our family thoroughly enjoyed your company.

For more information on the PCCH and the Portuguese Bend National Horse Show, visit : http://www.pcch.net/ 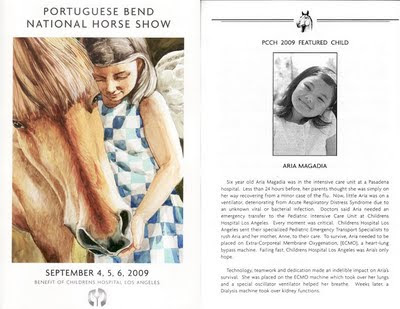 Six year old Aria Magadia was in the intensive care unit at a Pasadena Hospital. Less than 24 hours before, her parents thought she was simply on her way to recovering from a minor case of the flu. Now, little Aria was on a ventilator, deteriorating from Acute Respiratory Distress Syndrome... Aria needed an emergency transfer to the Pediatric Intensive Care Unit at CHLA. [her vital signs were going down] Every moment was critical... To survive, Aria needed to be placed on Extra-Corporeal Membrane Oxygenation (ECMO), an [experimental] heart-lung bypass machine... A week later, a Dialysis machine took over [her] kidney functions... [During her first four weeks in the ICU, she was given less than 50% chance of survival] ...Aria's [miraculous] recovery surpassed [her] doctors' expectations. Having been essentially asleep for a month with her internal organs recovering... Aria [slowly got well]... [but being bedridden and unconscious for so long had taken its toll]... [with months of physical therapy relearning her motor coordination] Aria progressed from having the motor skills of a baby to those of a six year old child... After five long months [of recuperation], with family members taking shifts to be with Aria, the Magadia family went home... Aria just turned eight, now a vibrant 3rd grader... Mom, Anne expresses from her heart, "Everyone showed incredible compassion, a whole team of people came together. They all had a hand in giving us our daughter back, for that we will be forever grateful." 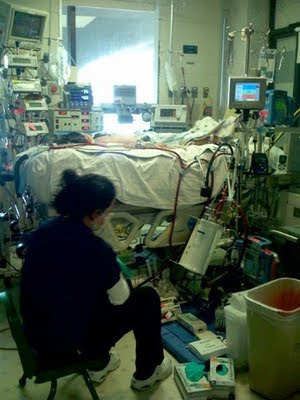 Aria in the Pediatric Intensive Care Unit (PICU) of CHLA

After recovering from the harrowing half-year ordeal, My wife Anne began speaking on behalf of Childrens Hospital Los Angeles. She has been the guest speaker for several gala fundraising events and luncheon gatherings to raise money for CHLA.

Aria, on the other hand, has become the hospital's favorite "face" for its fund raising campaign. She has been featured in the Hospital's inhouse video, the magazine, the valentines card and the mailer. Her story has be told and retold in various CHLA related publications.

We are eternally grateful to CHLA for the miracle we received and to the countless number of people who helped save our daughter. We are honored to be a part of the CHLA family and we will continue to help in anyway we can.

We would also like to thank the numerous institutions and organizations that continuously sustain the growth of Childrens Hospital Los Angeles. Without your past support, the technology and the know-how that helped save our daughter might not have been in place. The support you give today, will save the lives of countless children in the future.
For more information on Childrens Hospital Los Angeles, visit: http://www.childrenshospitalla.org/ 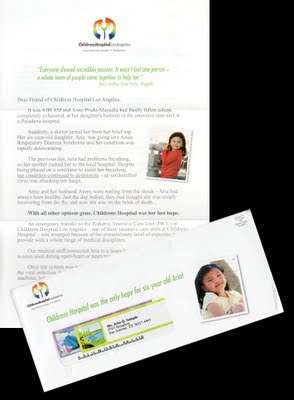 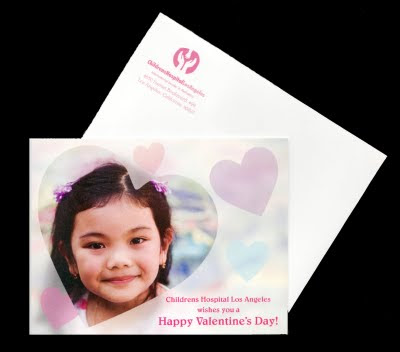 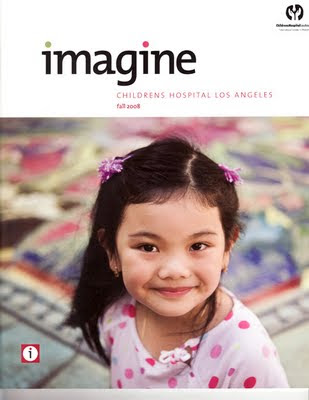 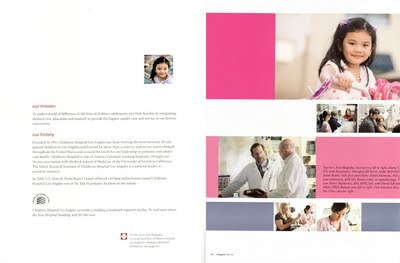 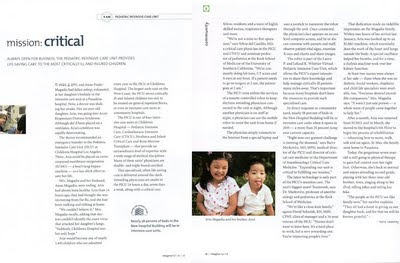 Email ThisBlogThis!Share to TwitterShare to FacebookShare to Pinterest
Labels: life in general, miracles, my family, my kids, Organizations

I was very alarmed reading your blog about what your daughter has gone through. But I am glad that she has recovered. I can feel for her, because I got very sick too, 3 years ago. I was on treatment for 6 months, then had a major operation that ended my medical ordeal. I have a daughter, she's 5 years old, but I will not be able to bear any more child, but I am glad that God has blessed us with one. I was wondering how you are doing and your family, glad that I came across your blog. You have excellent photos here, very impressive. I am still a friend, hope your wife will not mind, I also want to be friends with her if that's ok. I pray for your continued happiness and safety for your whole family. I hope our families can meet in the future. Take care.