Quentin Tarantino’s newest film “Inglourious Basterds” pays homage to the Italian Spaghetti westerns and to the 1970s World War II Macaroni combat film “Inglorious Bastards” by Italian Director Enzo G. Castellari that Quentin absolutely adores. Like most of his films, the movie is an eccentric blend of influences from various genres, styles and cultures amusingly spliced together to create an original.
Like Quentin, I am a big fan of Director Sergio Leone. The opening sequence (or Chapter 1) of the movie is an obvious retake of the “family massacre scene” from Leone’s “Once Upon A Time in the West.” The camera angles, the editing, the pacing and the framing are all Leone. The film’s musical score and soundtrack actually contains several previously released tracks by Ennio Morricone, Sergio Leone’s musical composer and frequent collaborator (Tarantino actually wanted Morricone to compose the original soundtrack for the film, but he was unavailable). “Once Upon A Time in Nazi Occupied France” was even seriously considered as a subtitle for this film. I believe Quentin actually saw a similarity between his Nazi villain Hans Landa and Leone’s villain Frank (played by Henry Fonda) in “Once Upon A Time in the West.” Both look and act unassumingly -- they play against their stereo-type, but are actually cold-blooded ruthless killers.

But instead of keeping his personality bottled like Leone’s Frank, Hans Landa loves smart conversations and mind games -- his interrogation method, personality and character are purely Tarantino’s. The dialogue between Landa and the French dairy farmer is absolutely brilliant! By the time the Nazi soldiers stepped into the cabin and started spraying their machine guns… I was already on my feet clapping. The opening scene, in itself, was worth my ticket price.


Sadly, the rest of the movie did not live up to its first 10 minutes. The rest of the film is still entertaining, but lacks depth. I am not a real fan of vintage B movies which are Quentin’s primary influences, but the rest of the movie seemed stylistically convoluted and overly simplistic to me. Like Castellari’s “Inglorious Bastards,” which was a cross between the “Dirty-Dozen” and “Battle of the Commandos,” Tarantino’s own “Inglourious Basterds” is a hodgepodge of stylistic influences and story-lines culled from his favorite movies. Brad Pitts’ character Aldo the Apache even resembles Lee Marvin’s character Major John Reisman in the "Dirty-Dozen." 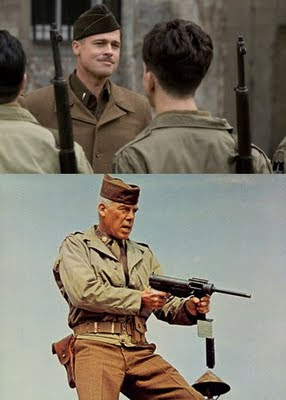 The three storylines: the revenge plot of Shoshanna Dreyfus; the Basterds; and Operation Kino, though separate in origin (and probably in cinematic influences as well) eventually come together in one explosive, though historically inaccurate conclusion. With the exception of Hans Landa, most of the characters (specially the Nazi high-command -- including Hitler) were hilariously funny, but were portrayed as simpletons – caricatures of historical characters that in reality were able to manipulate and subdue a whole continent. I guess casting Mike Myers as a British Officer is indication enough of the overall tone of the movie. But I just had a hard time shifting back and forth from one hilarious episode to Shoshanna’s plight or to the sudden turns of violence that punctuate the story. Comedy can be a good counterpoint to violence and emotional drama, but when it shifts from one to the other incessantly and the lines between them are blurred, it can become a bizarre cocktail only the Joker in “Dark Knight” can savour.

Despite all that, I still recommend this movie to anyone just planning to have a good time at the movies. After all, cinema is not just art it is also about entertainment. The movie is amusing and hilarious (in key scenes) in the least. It is a Quentin Tarantino film after all and the dialogue (particularly of Hans Landa) is marvelous, bordering on sublime. The acting tour de force that is Austrian actor Christoph Waltz playing Hans Landa is magnificent and his performance wholly deserving of the recent Best Actor Award he received from the Cannes Film Festival. And as I have already mentioned, the first scene (Chapter 1 in the film) alone is worth the price of admission.


Here is the DigiGods interview of Christoph Waltz, the actor who played Hans Landa in the movie, talking about the film and his character:

--Publicity stills from Inglourious Basterds, Once Upon A Time in the West and Dirty Dozen. Interview from YouTube.com by the DigiGods.